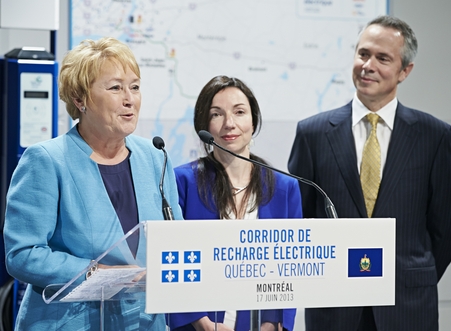 June 27, 2013 – Quebec premier Pauline Marois and Vermont governor Peter Shumlin have announced what they say is the first electric vehicle (EV) charging corridor linking Quebec and Vermont, U.S. Some 160km long, the route is comprised of 31 charging stations of the Electric Circuit, the largest public charging network in Quebec, and Drive Electric Vermont network. This number is expected to grow as more partnership agreements are signed.

Starting this fall, plug-in EV drivers can travel the corridor knowing they can power up at one of the charging stations located between Montreal and Burlington, Vt.