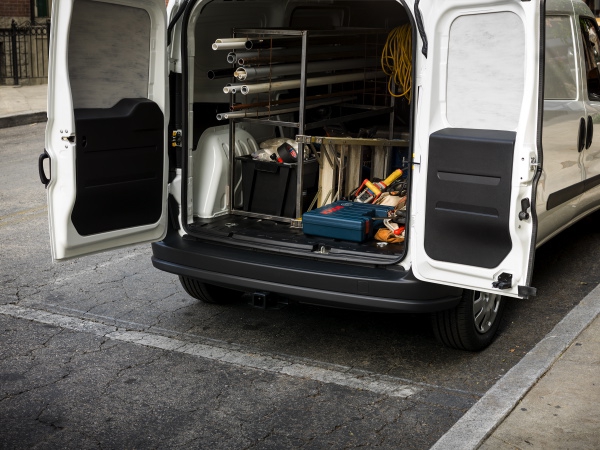 June 27, 2014 – The 2015 Ram ProMaster City is the automaker’s newest addition to its commercial vehicle lineup, and joins the larger ProMaster and Ram C/V as a Class 1 van offering. Among the available configurations is the two-seat Tradesman cargo van.

The foundation is a steel unibody design, with a payload capability of 1883 lb and wheelbase of 122.4 in. The City employs independent, coil-sprung bi-link rear suspension; the configuration, says Ram, increases driving comfort, enhances stability, and ensures maximum safety characteristics in all load situations.

The span between the rear wheel wells is 48.4 in. to enable easier loading/unloading. Above the wheel wells, the City’s nearly vertical side panels give it a width of 60.4 in. Combined with an interior roof height of 51.8 in., the end result is a cargo volume of 131.7 cf.

The vertical side panels are upfitter-friendly, says Ram, simplifying the attachment of shelves or storage racks for specialized use. The floor measures 87.2-in. long and is fitted with six standard D-ring tie-downs. Each side is fitted with a sliding door with a 26-in. opening. The roof is prepped for load rails or roof racks (available through Mopar) with a weight capacity of 154 lb.

The rear of the City is fitted with 60/40 split-swing doors. Both doors initially swing open 90 degrees, and—for dock loading—can swing open to 180 degrees via a release button on the door latch. The latch automatically re-engages when the door is closed.

The 2015 Ram ProMaster City is powered by the 2.4L Tigershark I-4, which generates 178 hp at 6400 rpm, with a peak torque of 174 lb-ft. According to Ram, the vehicle’s centrepiece is its “segment-exclusive 9-speed automatic transmission” powertrain.