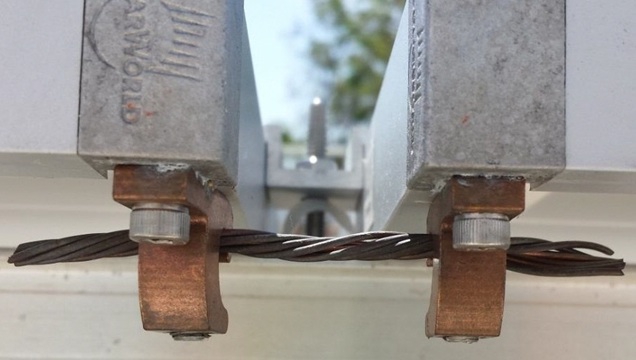 August 21, 2014 – SolarWorld is recalling solar systems installed with bare-copper grounding lugs (photo 1) installed after June 1, 2010, as these lugs can corrode, which could result in a faulty ground circuit, posing an electric shock, electrocution or fire hazard.

The installation instructions for SolarWorld solar systems sold after June 1, 2010, called for the use of GBL-4DB lugs for grounding. SolarWorld has revised these installation instructions to explicitly call for tin-coated lugs (photo 2), specifically Ilsco part number GBL-4DBT. (‘T’ is for tin-coated, and indicated by the silver colour of the lug.)

SolarWorld has received one report of corrosion related to the bare-copper lugs in the United States. No injuries have been reported. Health Canada, meantime, has not received any reports of consumer incidents or injuries related to the use of these solar panel lugs.

About 210,000 units were sold in Canada and about 1.3 million in States through SolarWorld installers and distributors, or other distribution companies. The recalled products were sold from June 2010 through June 2014 in Canada and the U.S.

The recalled products were manufactured in the States by SolarWorld Americas LLC.

From the ground, Customers may be able to identify whether a tin-coated lug (silver) or a bare-copper lug (brown) has been used on their solar panels. Consumers who can identify the improper lugs should contact SolarWorld for replacement. If customers cannot determine which grounding lugs were used, they should contact SolarWorld to have an authorized SolarWorld agent inspect the installation and replace the lugs with tin-coated grounding lugs, or an equally safe alternative remedy at no cost.

SolarWorld is requesting that distributors and others remove SolarWorld’s installation instructions dated before June 2014 from their websites or other commercial information sources.