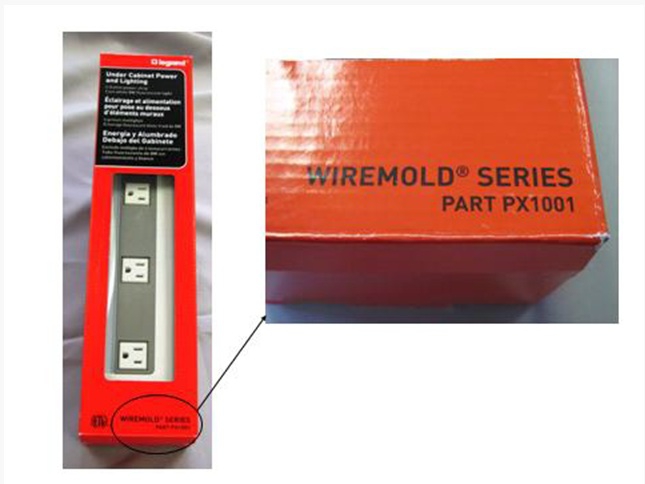 May 15, 2014 – The Wiremold Company is recalling Legrand undercabinet power and lighting (4-outlet power strip) Model PX1001 due to “substandard” internal electrical connections, posing a risk of overheating and/or electrical fire.

The manufacture dates of the recalled products are presented as product date codes. The recalled date codes are January 2011, June 2012, October 2012 and November 2012, and are imprinted on a circle on the bottom with an arrow pointing to the number of the month and the year in the centre. The model number PX1001, and UPC number 086698001253, are imprinted on the bottom of the packaging.

The Wiremold Company has received one report of an incident in the United States. No injuries were reported. Health Canada has not received any reports of consumer incidents or injuries related to these power strips.

About 42 units of the affected power strips were sold in Canada and about 46,000 in the United States. An additional 127 units were not returned in Canada during a previous unrelated recall of this product, and are now also subject to this new recall.

Manufactured in China, the affected power strips were sold from February 2011 to April 2014 in Canada and the United States.

You should immediately unplug and stop using the power strips and return them to Legrand Wiremold for a full refund. Contact the company at (855) 692-4620 or visit them online and click on Recall Information.