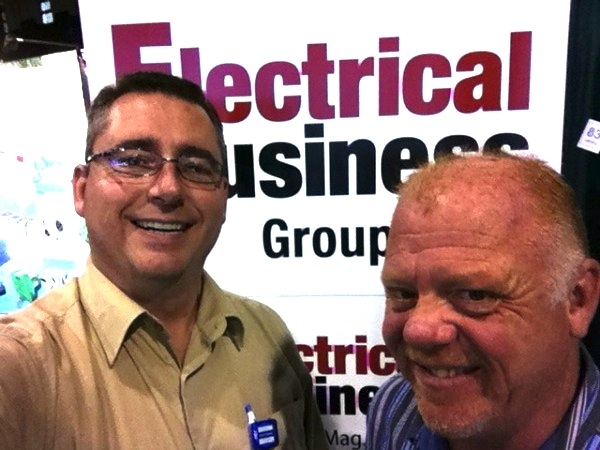 November 4, 2011 – EBMag’s Anthony Capkun & Scott Hoy thank everyone who stopped by our booth to say Hello and chat about the magazine and industry issues, and swap “war stories”. We had a great time at the event, and hope you found it as beneficial as we did. Meantime, if you weren’t there, check out our consolidated Tweets and Photos below (in reverse chronological order):

It’s a wrap for us here at BCEA Expo. BIG Thanks to everyone who stopped by the EBMag booth to say Hello and chat.

Are you in the Vancouver area? Come down to the PNE for BCEA Expo, which runs until 8 pm.

One more hour, then we’ll have the results of the BCIT skills competitions here at BCEA Expo at the PNE.

Great to see a lot of students of the electrical trade here at BCEA Expo, expanding their knowledge outside the classroom

Let’s not forget the Chevy Volt, which you can also see at BCEA Expo today at the PNE pic.twitter.com/qPWqQ2Q6

At BCEA Expo you can check out the Nissan Leaf all-electric vehicle pic.twitter.com/PMnvOLbf

Mitsubishi I-MiEV another electric vehicle you can see here at BCEA Expo at PNE pic.twitter.com/LOQHdNLG

Ford Transit Connect one of several electric vehicles you can see here at BCEA Expo pic.twitter.com/jTYRme9f

Terry Becker of ESPS wraps up session at BCEA on @CSA_Standards Z463 Guidelines for Maint. of Elec. systems pic.twitter.com/1fpBYKGQ

Our friends from the Electrical Heritage Society of British Columbia are at BCEA Expo. pic.twitter.com/HDRTunE0

EBMag is checking out the BCIT Wiring Skills Competition at BCEA Expo! pic.twitter.com/fJKHZhfy

Chatting with @TerryWBecker of ESPS at BCEA Expo; says he’s got THE solution to arc flash training pic.twitter.com/b9KUr24x

EBMag is in Vancouver for BCEA Electrix tomorrow. Come down & use our FREE Wi-Fi pic.twitter.com/1pLaZAAz