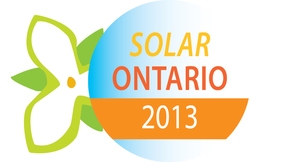 March 25, 2013 – CanSIA (Canadian Solar Industries Association) has announced the dates for the upcoming Solar Ontario 2013 conference and trade show… will you be attending?

(EBMag was there at last year’s Solar Ontario conference. Click here for our PHOTOS and VIDEO from the event.)

CanSIA expects to attract more than 1200 solar industry professionals and solar energy manufacturers, engineers, installers and architects to the event. According to organizers of the event, here are the top five reasons to attend Solar Ontario 2013:

1. Over 1000MW of solar facilities are expected to be commissioned in Ontario in 2013 – more than the past five combined.

2. The Ontario government and ministry of energy leadership has changed with premier Kathleen Wynne and Bob Chiarelli now at the helm, so how could this affect the province’s solar energy industry?

4. Situated about an hour from Toronto, Ont., Niagara Falls is one of Canada’s most attractive tourist destinations. From the majestic falls to the renowned wine country, there is plenty to see and do before and after the conference events.

5. Great value at a great price—as one of the Ontario region’s largest and most influential solar industry event, Solar Ontario 2013 is great value-for-money, says CanSIA.