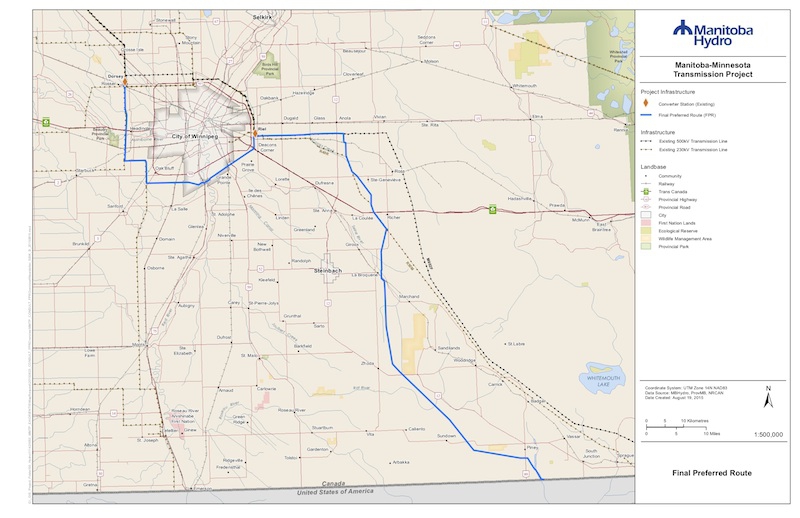 September 24, 2015 – Manitoba Hydro has announced it is moving forward with the final preferred route for the Manitoba-Minnesota Transmission Project (MMTP). The utility said it recently filed an Environmental Impact Statement (EIS) with provincial regulators, as part of the process for securing a license for the transmission line under the province’s Environment Act.

“The filing of the EIS with Manitoba Conservation and Water Stewardship begins the formal regulatory review process for the project,” said Shane Mailey, Manitoba Hydro’s vice-president of transmission. “As part of the process, the public will have an opportunity to comment on the project and the route through Manitoba Conservation and Water Stewardship,” he added. “The selection of the route and submission of the EIS are the culmination of several years of planning, environmental studies, and engagement with a broad range of interests.”

The MMTP is needed to both export surplus electricity and enhance the reliability of the province’s electricity supply in emergency and drought situations, the utility said. The 213-km, 500-kilovolt alternating current line will originate at the Dorsey Converter Station—located near Rosser, northwest of Winnipeg—and travel south around Winnipeg. From southeast Winnipeg, the transmission line will continue south, crossing the Manitoba-Minnesota border south of Piney, Manitoba, and connecting to the Great Northern Transmission Line, which will be constructed by Minnesota Power.

The estimated cost of the project is $350 million with an anticipated in-service date of mid-2020, according to Manitoba Hydro.