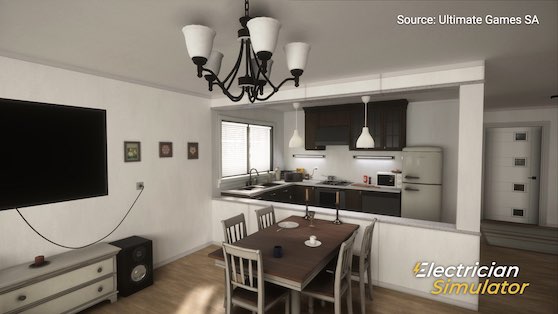 December 4, 2022 – Developers of Electrician Simulator call it “a relaxing game where you make a career for yourself as an electrician”.

“Electrician Simulator is something entirely new in the gaming industry. The game takes direct inspiration from the real work of electricians but, naturally, certain elements have been simplified. After all, it’s a game focused on relaxation and fun,” said Take IT Studio!’s Dorian Loewe.

In the game, you play a novice electrician taking over the family business. The gameplay focuses on carrying out various jobs—mostly consisting of story-based missions—and repairing items in the workshop.

“We placed considerable focus on realistic lighting and ample variety in the gameplay; interesting jobs, ranging from small repairs to replacing a building’s entire electrical grid, are interspersed with workbench jobs where you conduct repairs on realistically recreated electrical items.”

Tools such as screwdrivers, cable detector, and voltage tester are also included in the game.

Electrician Simulator made its PC debut back in September; in 2023, it is scheduled to release on PlayStation 4, PlayStation 5, Xbox One, Xbox Series X/S, and Nintendo Switch.

Related
Why Chariot under boring lights when you can do the Hue?
Answering the “Call of Duty” to uncover gaming console energy use
EA Technology PD Simulator and Ultrasonic Contact Probe
SAIT students “energized for the future” with power system simulator
Tags