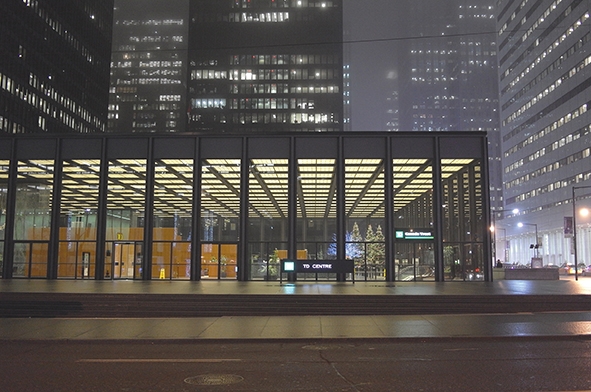 October 11, 2016 – When the TD Bank Tower opened in 1967, it “introduced the modern workplace to a business community eager to step up and compete as an international financial capital. It also introduced modern standards of design and community to a city ready for change”.

So reads the history at tdcentre.com. At 4.3 million sf, the TD Centre—managed by the Cadillac Fairview Corp. Ltd. (which is owned by the Ontario Teachers’ Pension Plan)—is one of the largest LEED Platinum-certified properties in North America, in addition to being one of North America’s largest business communities.

Now the Toronto-Dominion Centre—the original skyscrapers of Toronto’s Financial District and the largest commercial complex in Canada—is modernizing and changing again with the times.

The TD centre consists of six buildings: Toronto Dominion Bank Tower, 77 King Street West, 100 Wellington Street West, TD Waterhouse Tower, Ernst & Young Tower and 95 Wellington Street West.
Decades ago, according to TD Centre’s website, TD Bank chair Allen Lambert “understood the needs of an emerging Canadian business class and the role that real estate would play in its success”. He partnered with Fairview Corp. (now Cadillac Fairview) to realize his initial vision for a single tower at the corner of King and Bay but, when an opportunity arose to accumulate more land, they seized the opportunity. A corner site at King and Bay became 5 acres, and the vision for something much bigger took root.

The site now required an architect, but nothing of this size had ever been built in Canada, so an international search began, culminating with the retention of Ludwig Mies van der Rohe.

“At the time, the development, financing and construction of Toronto-Dominion Centre took enormous courage,” reads tdcentre.com. With TD Bank taking only seven floors of the first Tower, it meant that over one million square feet of space would need to be leased to other tenants in the initial phase.
It was a gamble that other business leaders of the day jokingly referred to as “Lambert’s Folly”.

Mies van der Rohe’s initial design for the site was a two-tower design plus Banking Pavilion. Only one major design change was requested by the partnership: the complex needed an underground retail pedestrian mall. Eventually, the original black tower design was expanded to five towers (with the addition of 95 Wellington in 1995).

On a mission of environmental performance

Several years ago, TD Centre started publishing annual Sustainability Reports to show how it was performing in the areas of sustainability and environmental performance.

“Doing our part to minimize our environmental footprint is vitally important to the TD Centre and the 21,000 people who come to work here every day,” says David Hoffman, general manager. “We are deeply committed to sustainability and extremely proud to be recognized among the leading green buildings in the world.”

Last year, all six of the TD Centre’s towers earned LEED Platinum certification, making the 4.5 million-sf complex one of the largest properties in North America to be granted the highest possible ranking for existing buildings. To qualify, TD Centre met strict criteria for energy and water efficiency, waste management and indoor environmental quality.

Over the past four years, TD Centre’s investments in these areas have resulted in a 16.8% reduction in energy use, a 16.7% decrease in water consumption, and diverted 19 million kilograms of waste from landfill.

According to its latest Sustainability Report, TD Centre achieved the following year-over-year results in 2015 alone:

“Everything we’ve been able to achieve has been the result of meaningful collaboration with our tenants, who continue to encourage us to build on our environmental efforts,” explains Hoffman. “We will continue to aim for even healthier and greener buildings, and to invest in new technologies and innovative tenant initiatives to raise the bar for sustainability even higher.”

For example, as part of the program in 2015, tenants were offered free “midnight” energy audits.

Conducted by an external consultant, the audits were performed outside of business hours to identify potential energy savings that could be achieved. Ultimately, the audits uncovered nearly 500,000 kWh of potential electricity savings—worth about $70,000 at current electricity prices.

Lighting retrofit part of the plan

Cadillac Fairview is always searching for opportunities to reduce energy usage and minimize our environmental footprint, Hoffman adds. “This [lighting] upgrade to the most energy-efficient LED lighting delivers superior quality and significant cost savings for our tenants.”

“We engaged a lighting consultant from Ottawa [Gabriel Mackinnon Lighting Design] to complete a study for us and determine if LED lamps would be suitable for our property,” explains Adrienne Cressman, embedded energy manager with TD Centre. “The consultant provided two acceptable LED retrofit lamps, which we included in our tender.”

The solution selected for the retrofit involved Sylvania SubstiTube IPS LED T8s, which promise a reduction in energy consumption by up to 40%. They are suitable for dry and damp locations in both indoor and outdoor settings. The lamps are engineered to operate on existing instant start and select programmed rapid start electronic T8 ballasts, and are rated to 50,000 (L70) hours.

“We tendered the material to two vendors,” says Cressman of seeking a distribution partner; of the two, Gerrie Electric provided a competitive bid. Furthermore, Gerrie is the lamp provider for Cadillac Fairview, Toronto.

A “significant capital expenditure,” the retrofit was tendered to five contractors, notes Cressman. GDI submitted the winning bid, and “they are also very familiar with the TD Centre, which was a win-win”.

GDI describes itself as a provider of ‘soft’ facility services, including janitorial, disinfection and sterilization, carpet cleaning, floor stripping and light building maintenance. Back in February 2016, however, GDI joined with Ainsworth Inc. to be able to provide ‘hard’ services, including service, installation and maintenance of HVAC, refrigeration, mechanical, and electrical systems and equipment.

All work was completed after-hours, says Cressman. The crews first started with a few unoccupied floors to work through the process and work out any kinks. GDI then provided a schedule for each tower.

The distributor started shipping product around the end of 2015, explains Elaine Gerrie, co-president & CEO, with the final shipment occurring in Summer 2016. The company had two dedicated staff looking after the job, and working with the supplier for releasing shipments, and tracking those shipments to ensure they came in on time.

“So it was a real coordination of logistics,” says Gerrie, adding they could only use certain-sized trucks to get in and out of the loading bay with ease.

Tony Valentini, lighting specialist with Gerrie, says that while they experienced a few minor challenges (which were all resolved quickly), one particular snag stands out.

“A shipment was being made during one of the worst storms of the winter season, and the delivery truck chose that day to have engine issues while en route,” says Valentini. “But, through coordination with [Ledvance’s] Logistics people, their carrier and our team at Gerrie Lighting Solutions, we were able to coordinate an alternate vehicle to go to the location, offload/transfer the shipment from one truck to the other, and still meeting the delivery time frame.”

“To change the lights, we needed to use ladders over desks. Although GDI covered all surfaces and used care, there were still some issues with damage,” Cressman notes, “[but] we worked through the issues with the installers and added further protection as required. The project went very smoothly while working closely with tenant relations.”

The entire job was completed in just over four months. Cressman adds TD Centre did apply for an IESO incentive (Independent Electricity System Operator), and expects the payback to be under five years.

“And it really went smoothly. The team really worked well with [Ledvance],” and also with the installer and the owner, says Gerrie. The project came in on time and on budget, she says. “It was a really good partnership.”

Valentini, too, is very pleased with the end result… “knowing that we have been instrumental in dramatically reducing energy costs and lowering the carbon footprint of one of North America’s largest commercial/office facilities with little inconvenience to the thousands of people who work at TD Centre. And, we have dramatically improved the quality of light”.