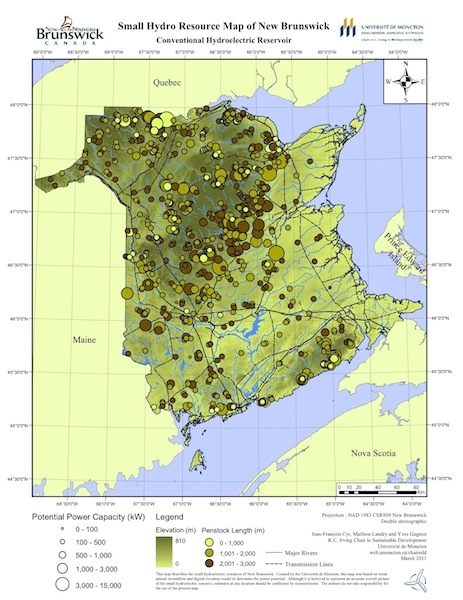 March 7, 2012 – Two new renewable energy atlases detailing the best locations for setting up hydro and solar installations in New Brunswick were unveiled today. The Department of Energy produced the maps in conjunction with the K.C. Irving Chair in Sustainable Development at the Université de Moncton.

“In the New Brunswick Energy Blueprint, our government laid out a clear and ambitious goal of 40% renewable energy generation by 2020,” said energy minister Craig Leonard. “We want to make it easy for industry, developers, communities, and home and cottage owners to get the information they need, and that starts with providing the best locations for these types of resources. These maps will be an important tool in promoting renewable energy.”

One atlas shows the small-hydro resource potential of both conventional dam structures and run-of-the-river hydro-electricity configurations in the province. The second atlas is a set of solar radiation maps showing that the solar energy resource in New Brunswick varies significantly by season and by geography. The maps are available on the Department of Energy’s website.

The new Hydro Atlas indicates that New Brunswick has conventional resources estimated at a potential of 352 megawatts at 695 sites around the province. The sites range from 92 kilowatts to 15 megawatts of potential power.

“With the use of green energy becoming more paramount every day, the Hydro Atlas shows that the province has a good small-hydro resource potential which could be developed for both its environmental benefits and for the social and economic benefits of its residents,” said Yves Gagnon, the K.C. Irving Chair in Sustainable Development.

“The solar maps show that New Brunswickers have the potential in the future to pursue the opportunities that this renewable energy source can bring to the province,” said Gagnon. “While the infrastructure required for solar power is still very costly, we hope that in the not-too-distant future it will become a much more affordable option for individual New Brunswickers.”

The two renewable energy atlases join the province’s Wind Power Resources Maps, which were also jointly developed with the K.C. Irving Chair in Sustainable Development at the Université de Moncton. (The wind power maps were made available to the public last year.)