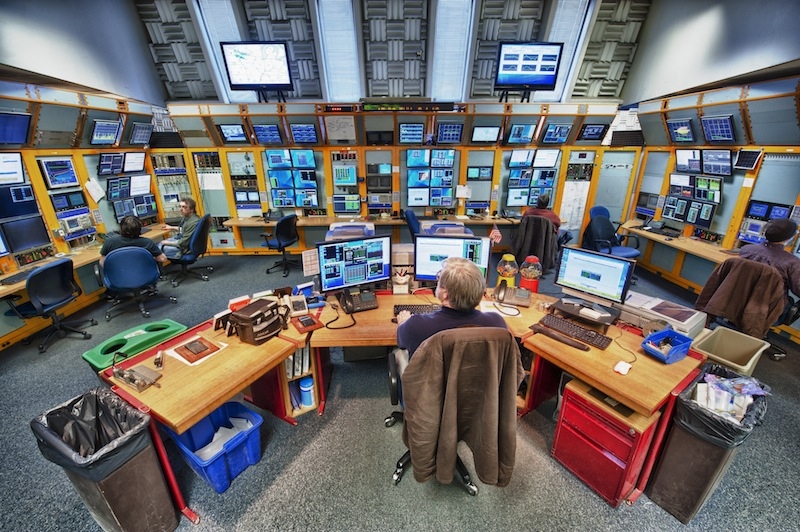 March 14, 2012 – A group of scientists led by researchers from the University of Rochester and North Carolina State University have, for the first time, sent a message using a beam of neutrinos—nearly-massless particles that travel at almost the speed of light. The message was sent through 240 metres of stone and said simply, “Neutrino”.

“Using neutrinos, it would be possible to communicate between any two points on Earth without using satellites or cables,” said Dan Stancil, professor of electrical and computer engineering at NC State and lead author of a paper describing the research. “Neutrino communication systems would be much more complicated than today’s systems, but may have important strategic uses.”

Many have theorized about the possible uses of neutrinos in communication because of one particularly valuable property: they can penetrate almost anything they encounter. Were this technology applied to submarines, for instance, they could then (conceivably) communicate over long distances through water; which is difficult, if not impossible, with present technology. And if we wanted to communicate with something in outer space that was on the far side of a moon or planet, our message could travel straight through without impediment.

“Of course, our current technology takes massive amounts of high-tech equipment to communicate a message using neutrinos, so this isn’t practical now,” said Kevin McFarland, a University of Rochester physics professor who was involved in the experiment. “But the first step toward someday using neutrinos for communication in a practical application is a demonstration using today’s technology.”

The team of scientists that demonstrated that it was possible performed their test at the Fermi National Accelerator Lab (or Fermilab, for short) outside of Chicago. The group has submitted its findings to the journal “Modern Physics Letters A”.

At Fermilab, the researchers had access to two crucial components. The first is one of the world’s most powerful particle accelerators, which creates high-intensity beams of neutrinos by accelerating protons around a 2.5-mile-circumference track then colliding them with a carbon target. The second is a multi-ton detector called Minerva, located in a cavern 100 metres underground.

The fact that such a substantial setup is necessary to communicate using neutrinos means that much work will need to be done before the technology can be incorporated into a readily usable form.

Today, most communication is carried out by sending and receiving electromagnetic waves. That is how our radios, cell phones and televisions operate. But electromagnetic waves don’t pass easily through most types of matter. They get blocked by water and mountains, and many other liquids and solids. Neutrinos, on the other hand, regularly pass through entire planets without being disturbed. Because of their neutral electric charge and almost non-existent mass, neutrinos are not subject to magnetic attractions and are not significantly altered by gravity, so they are virtually free of impediments to their motion.

The message the scientists sent using neutrinos was translated into binary code. In other words, the word “neutrino” was represented by a series of ones and zeroes, with the ones corresponding to a group of neutrinos being fired and the zeroes corresponding to no neutrinos being fired. The neutrinos were fired in large groups because they are so evasive that, even with a multi-ton detector, only about one in ten billion neutrinos are detected. After the neutrinos were detected, a computer on the other end translated the binary code back into English, and the word “neutrino” was successfully received.

“Neutrinos have been an amazing tool to help us learn about the workings of both the nucleus and the universe,” said Deborah Harris, Minerva project manager, “but neutrino communication has a long way to go before it will be as effective.”