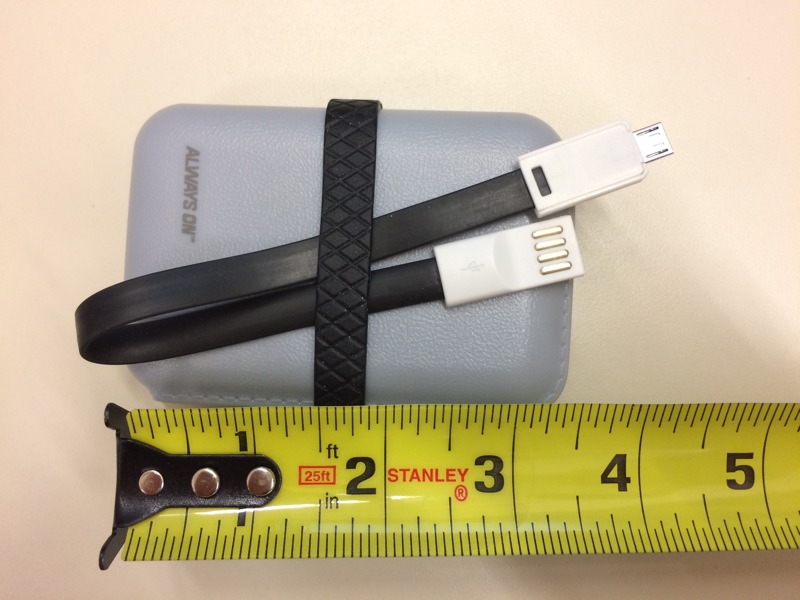 November 15, 2016 – On days when I’m at my desk, everything I need is at my fingertips, including an electrical outlet for charging my phone. But then there are those days when I’m out in the world, covering someone’s conference or tradeshow (maybe hustling from one parking lot to another, or hopping on a train to go into the city), and both time and electricity become luxury commodities.

The gear I carry varies from one event to another, but one piece of equipment that’s always hard at work alongside me is my phone. With this device I capture images, shoot video, tweet information, check in with colleagues, watch a movie or play a game while I’m waiting to board a plane, and so much more.

My phone is my lifeblood, which is why a fully juiced phone = a happy user.

And there have been times when, while covering some event or other, I would watch in horror as my battery gauge dropped from a full 100% at start of day to 43% by noon, then 20% by mid-afternoon and lower… and I would be nowhere near a convenient plug-in location or, if I were, I wouldn’t be able to just leave my phone to charge because I was still using it.

While there are a few ways I can reduce the rate of battery consumption (e.g. dimming the screen, turning off vibration), it would be nice to be able to go full bore without compromise.

So when Rayovac reached out with news of new portable chargers on the market, I eagerly asked for a trial unit to see whether such a device was worth it. You see, my previous experiences with charging-on-the-go solutions involved tradeshow giveaways that were built for novelty, not purpose, so I was skeptical.

The Rayovac PS93GY 3X
According to the literature, the PS93GY 3X portable phone charger holds enough power to fully recharge your phone three times (depending on device, of course), and will hold a charge up to six months. The 6000-mAh lithium ion rechargeable battery can be recharged 300+ times (via USB charging).

The unit measures about 3.75 x 2.5 x 1 in., and weighs about 0.4 lb. In my photo, you see a streamlined USB charge cord that tucks in nicely under a rubber band encircling the unit, which is a simple yet effective solution for cord management.

The PS93GY sports a single LED battery gauge. At first, I didn’t know what the blinking lights meant and, while I could be wrong, I don’t remember seeing anything on or in the packaging to explain it. I found a product description online, but it didn’t explain the blinking LED meant, either. I ended up having to contact the Rayovac folks, who explained 4 blinks show a full charge, 3 blinks show a 3/4 charge, 2 blinks for half, etc.

Ok, with that sorted out, I was ready to test the charger with my iPhone 5s.

The first test was to see how the phone would charge sitting idle. Even idle, the phone is drawing some power for Wi-Fi and cellular connectivity, and the Bluetooth was also enabled. (I did not charge the phone while it was completely Off.)

So I started the test mid-afternoon while at around 50% of a full charge, and here’s how it went:

So it took roughly 1.5 hours to go from about 50% to 90%, which about 2 minutes per percentage of charge. I suppose that’s OK, but I’m usually near an electrical outlet when I’m not using my phone, anyway (i.e. nightstand next to my bed, kitchen counter, etc.). Time to ratchet things up a bit.

The times I desperately need a backup power source are when I’m actively using my phone, usually at an event where I’m taking photos, shooting video, tweeting, etc. Should my battery become desperately depleted, I don’t have time to wait around for a charge. So my next test aimed to see how well the Rayovac charger kept my phone charged while it was in high-consumption mode.

For this test I chose Sky Force Reloaded, a resource-intensive game with sound effects, music and plenty of scrolling, shooting, exploding action. A game like this drains my battery like there’s no tomorrow.

My phone was still at around 90%, and still connected to Wi-Fi and the cell network, and Bluetooth-enabled. I plugged the phone into the backup charger and dove into the game, sticking with Hard and Insane difficulty levels to ensure a good turnout of enemies, weapons fire and explosions.

Here’s how it went:

I finally gave up; not because of the battery (no issues there), but because Level 10 Insane had finally taken the fight out of me.

Summation
Without having had a similar device with which to compare, I truly didn’t know what to expect, so my expectations were kept in check. My main mission was to discover whether this thing can keep my No. 1 tool—my phone—in business while in high demand. I believe it accomplished that.

It won’t recharge your phone as quickly as, say, plugging into an AC source, but it will stop the bleeding, then slowly pump up your lifeblood as you get on with your day, be it in your vehicle, on the jobsite or wherever.

Available at Lowes.ca and in-store, the charger is compatible with Samsung, HTC, Motorola, LG and Nokia, as well as iPhone (when a Lightning cord is used). When I checked its price online, it was marked down to $22.49 (from $29.99).

With Christmas around the corner, I think the Rayovac PS93GY 3X makes a great stocking stuffer.