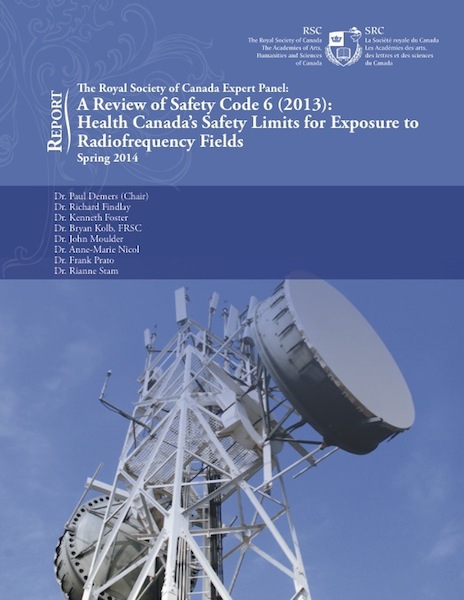 “This RSC review is an expensive exercise that was corrupted by industry and so is a waste of taxpayer dollars,” said Frank Clegg, CEO of C4ST, a not-for-profit, volunteer-based coalition whose mission is to “educate Canadians and their policymakers about the dangers of exposure to unsafe levels of wireless radiation from technology”.

For its report, the panel says it considered an “established adverse health effect” as one that is observed consistently across several studies with strong methodology. With this definition in mind, the panel reviewed the evidence for a variety of health impacts, including cancer, cognitive and neurologic effects, and so on.

“Despite increases in technology use and resulting exposure to wireless radiation, the panel chose to side with the powerful wireless industry and ignore domestic and worldwide published peer-reviewed science warnings of related health risks,” complains C4ST.

“Many of the studies considered reached conflicting conclusions,” admitted the panel. For example, “while effects of exposure to RF energy on aspects of male reproductive function have been found, the evidence has not been established to indicate that these translate into fertility or health effects”.

C4ST goes on to say China, Russia, Italy and Switzerland have guidelines 100 times safer than SC6, and that “Canadians deserve safety guidelines that keep up with technology”.

The panel disagrees, concluding that human exposure limits in SC6 “are science-based and do reflect the current state of knowledge regarding health effects”. It does receommend, however, that Health Canada can do a better job in its efforts to inform the public regarding the Safety Code, and provide “practical advice to concerned consumers on how to reduce their personal or their children’s exposure”.

The panel also recognizes that the report is based on current scientific knowledge and measuring techniques, and that “research on many of these health effects is ongoing, and it is possible that the findings of future studies may alter this balance of evidence”.