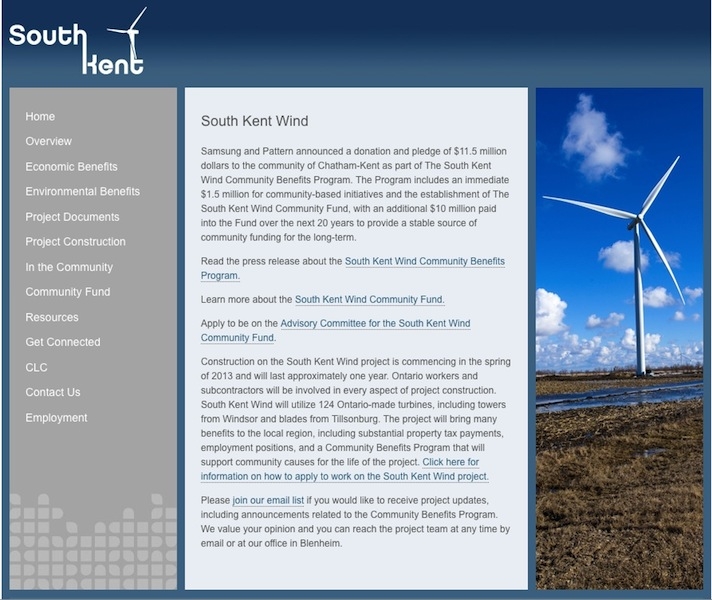 “Samsung is thankful to become part of this supportive community in Chatham-Kent and proud to start construction on our first Ontario wind energy project,” said KJ Kim, executive vice-president, Samsung C&T. “The South Kent Wind project will create thousands of high-skilled jobs that will benefit real people in this community.”

“Once complete, the project will inject more than $7 million in direct spending into the local economy each year of operations,” said Mike Garland, CEO of Pattern Energy.

“Siemens is increasing factory production and hiring to ramp up to full capacity to meet the demand created by South Kent Wind and other Samsung-Pattern Ontario wind projects,” said Jacob Andersen, vice-president, Wind Power Division, Siemens Canada Ltd. “Combined, Siemens and CS Wind are expected to create up to 600 jobs in the province.”

South Kent Wind will use TowerTEX’s TowerSHADE product on its wind turbines to mitigate the impact of the red lights at night on residents in the project area. The tower shades will completely eliminate light visibility from below the turbine out to 1.5 km, while allowing the light to be seen from above by aircraft.

Acting on their commitment to make a positive impact in communities where they build projects, Samsung and Pattern recently announced the $11.5-million South Kent Wind Community Benefits Program. Residents can apply online at www.southkentwind.ca to be on the fund’s advisory committee.