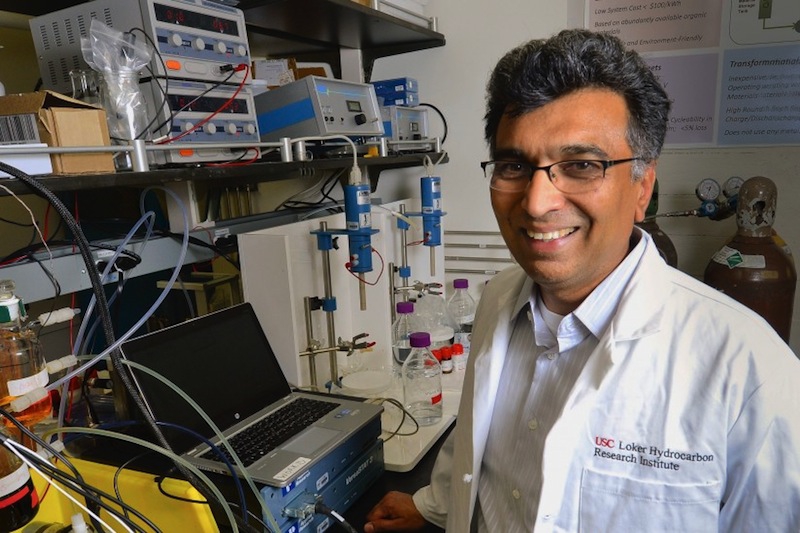 June 25, 2014 – Scientists at University of Southern California (USC) say they have developed a water-based organic battery that is long-lasting and built from cheap, eco-friendly components. Using no metals or toxic materials, the battery is intended for use in power plants, where it may serve as a large-scale means to store energy.

“The batteries last for about 5000 recharge cycles, giving them an estimated 15-year lifespan,” said Sri Narayan, professor of chemistry at the USC Dornsife College of Letters, Arts and Sciences. “Lithium ion batteries degrade after around 1000 cycles, and cost 10 times more to manufacture.”

PHOTO: USC professor Sri Narayan’s research focuses on the fundamental and applied aspects of electrochemical energy conversion and storage to reduce the carbon footprint of energy use and by providing energy. Photo © USC Photo/Gus Ruelas.

“Such organic flow batteries will be game-changers for grid electrical energy storage in terms of simplicity, cost, reliability and sustainability,” added Prakash.

“‘Mega-scale energy storage is a critical problem in the future of the renewable energy, requiring inexpensive and eco-friendly solutions,” Narayan said. The new battery is based on a redox flow design—similar to a fuel cell—with two tanks of electroactive materials dissolved in water. The solutions are pumped into a cell containing a membrane between the two fluids with electrodes on either side, releasing energy.

The design has the advantage of decoupling power from energy, say the scientists. The tanks of electroactive materials can be made as large as needed—increasing the total amount of energy the system can store—or the central cell can be tweaked to release that energy faster or slower, altering the amount of power (energy released over time) the system can generate.

The team’s breakthrough centred around the electroactive materials. While previous battery designs have used metals or toxic chemicals, Narayan and Prakash wanted to find an organic compound that could be dissolved in water. Such a system would create minimal impact on the environment, and would likely be cheap, they reasoned.

Through a combination of molecule design and trial-and-error, they found that certain naturally occurring quinones—oxidized organic compounds—fit the bill. Quinones are found in plants, fungi, bacteria and some animals, and are involved in photosynthesis and cellular respiration.

“These are the types of molecules that nature uses for energy transfer,” Narayan said.

Currently, the quinones needed for the batteries are manufactured from naturally occurring hydrocarbons. In the future, the potential exists to derive them from carbon dioxide, Narayan said.

The team has filed several patents in regards to design of the battery, and next plans to build a larger-scale version.