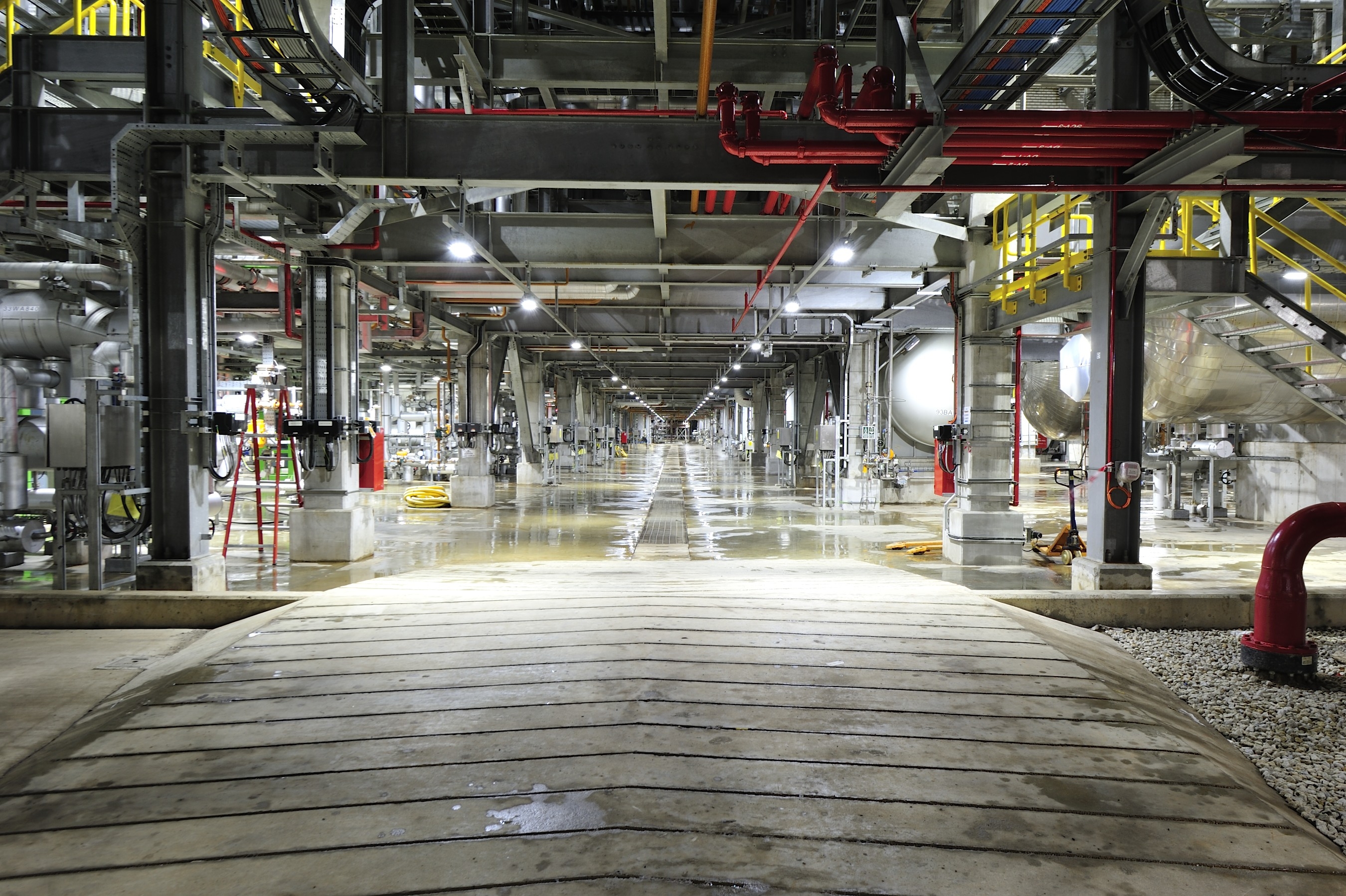 November 26, 2018 – Electrical contractors have increasingly adopted light-emitting diodes (LEDs) for illuminating industrial settings, primarily because they offer a more energy-efficient alternative to high-pressure sodium (HPS) and other conventional lighting systems. Recent data, however, also demonstrates a correlation between the technology and industrial workplace safety and efficiency, suggesting a switch to high-performance LED systems in these environments can significantly improve productivity and reduce the risk of accidents and other hazards.

Some of the best-performing industrial LEDs are now proven to last 10 years or more, eliminating the need for frequent bulb and fixture maintenance that is the case with HPS and other conventional high-intensity discharge (HID) lighting. While LED fixtures in some environments may still require periodic inspections, there is still a dramatic reduction in the number of changeouts, substantially reducing the cost of lighting maintenance and, thus, reducing the risk of injuries that can occur in the process.

Beyond the risks associated with conducting lighting maintenance at heights in industrial settings, there are also many workplace accidents caused by poor lighting, including slips, trips, falls and contact with hazardous objects and equipment. Research shows improving illumination could reduce these accident rates by as much as 60%, yet more than 90% of industrial facilities still rely on antiquated HPS and other HID-style fixtures to light their manufacturing, process and warehouse areas.

So, in addition to energy and maintenance savings, switching to industrial LED lighting could protect workers from potentially severe, life-altering injuries and save their employers a large portion of their annual costs of occupational injuries.

With these issues in mind, the following are seven ways switching to LEDs could dramatically improve industrial workplace safety.

1. LEDs provide better illumination
Conventional HPS systems produce uneven light, creating shadows and other dark areas on plant floors where visibility is very important. This can make it difficult for workers to see obstacles clearly, reducing their visual acuity to move around safely. In fact, many workers in industrial settings have to carry flashlights and other portable lamps to augment the dim HPS lighting, so they can see clearly. Sacrificing the use of one hand to carry a light not only makes them less productive, but could also reduce their ability to catch themselves to prevent injury if they were to slip, fall or trip.

Today’s LEDs can deliver crisp, clear lighting and improve visibility on the plant floor compared to HPS fixtures. With the addition of precision optics, their light can be directed to shine specifically where it is needed most, reducing shadows, dark spots and glare.

2. LEDs offer improved colour rendering
With a colour rendering index (CRI) of less than 30, the unnatural orange glow of an HPS light fixture distorts colours, making it extremely difficult to discern between various hues. Colour-coded warning signs and placards may become difficult to read, electricians may not be able to tell a blue wire from red and, in an industrial accident, it could be tough to distinguish blood from oil.

Modern LEDs produce brilliant, white light at a CRI of 70 or greater, mimicking daylight conditions and, thus, rendering colours more accurately. This helps workers perform maintenance, move through their facility and do their jobs with greater clarity and confidence.

3. LEDs eliminate restrike delay
In the event of a power outage, even with a quick switchover to a backup generator, any loss of electricity to an HPS bulb could leave the work area unlit or extremely dim for up to 20 minutes, until that fixture is restored to full light output. Many industrial areas do have emergency lighting, but it is often not sufficient to enable productive work to continue. In others, emergency lighting is not required at all, leaving workers to be caught off guard with low visibility in the event of a power outage.

Restrike delays are further exacerbated in cold conditions, creating production slowdowns and putting workers at greater risk of injury as they fumble about in the dark. LEDs, with their instant-on capability, help eliminate this problem, returning immediately to full output the split second their power is restored, to provide clear, complete visibility, enabling full productivity in a safer environment.

4. Industrial LED fixtures last longer
On average, HPS bulbs last about 24,000 hours, though this lifespan may be shortened in high-vibration or high-heat environments. Even those that do not diminish and burn out are prone to sudden, catastrophic failure. When the time comes to replace them, however, they may be difficult to access over and around process equipment.

This is why burned out lamps are quite common in many industrial facilities. In-house crews do not have the time or resources to fix each one as it fails, so they wait until many are out, to justify the effort. And of course when numerous bulbs are out of commission, it is all the more difficult for workers to see clearly.

Today’s durable industrial LED lighting, on the other hand, may carry an L70 lumen maintenance rating for more than 100,000 hours and a warranty for 10 years of use. By delivering more than four times the functional life of HPS bulbs, LEDs reduce lighting maintenance demand and cost by 75% over a decade, while also offering improved illumination for better productivity and safety over that period.

5. Integrated, purpose-built drivers improve performance
The longevity of LED fixtures is primarily dictated by their drivers, so these integral components must be matched appropriately to the fixtures. Some manufacturers use off-the-shelf (OTS) drivers when assembling their fixtures, but these are not designed for the rigorous temperature fluctuations and other challenges an LED fixture must endure in an industrial facility.

When an LED fixture fails, it is most often the driver that is at fault. Some companies address this problem by offering fixtures with replaceable drivers, but of course this negates the low-maintenance benefits of installing LED fixtures in the first place. Rather, integrated drivers that are purpose-built for industrial LED fixture applications should be specified, so as to deliver the longer life performance and reliability that make this type of lighting a worthy investment in the first place.

From a cost-benefit perspective, while it may be cheaper to buy three HPS fixtures instead of one LED fixture, the greater durability of the latter option will yield a lower total cost of ownership (TCO) and more substantial return on investment (ROI), based on both maintenance and energy savings.

6. LEDs contain no harmful chemicals
A single HPS bulb contains 10 to 50 mg of mercury, enough to poison an entire classroom of children above threshold limits. One broken bulb will expose every worker in the vicinity to this powerful neurotoxin. Some symptoms of acute poisoning, like nausea, vomiting and bronchitis, may be immediately present, while other symptoms of chronic exposure can have long-lasting implications, including tremors, memory loss and kidney damage.

LEDs, on the other hand, contain no harmful mercury or other chemicals, eliminating this very serious risk to workers.

7. LEDs help workers stay more alert
Poor lighting, such as that emitted by HPS bulbs, can contribute to workers’ fatigue and drowsiness, which in turn contribute to accidents and injuries. Unnatural light can also impact their moods and alertness, causing them to become sluggish and disengaged from their work.

As mentioned, LEDs produce brighter, crisper white output that is similar to daylight. By suppressing melatonin levels, this colour of light improves alertness and reduces fatigue by five times. In fact, this more natural light has been shown to improve workers’ mental performance on a standardized test, increasing the number of correct answers and reducing time spent on the test.

The future of industrial lighting
Thus, the evidence is abundantly clear. Upgrading to LED lighting fixtures can substantially reduce the burden and cost of maintenance, along with the risk of injury, to improve safety in industrial settings. They not only help protect workers’ health and well-being, but also reduce the costs associated with workplace injuries for facilities.