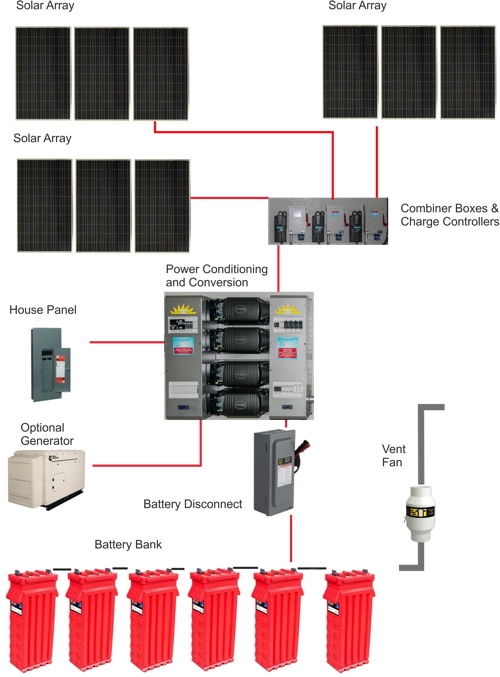 November 9, 2016 – Have you ever turned off all sources of power to an enclosure and still found a hazardous voltage inside? This is a very possible situation with battery-based solar systems using current “approved” equipment.

While I have warned about this possibility in the past, I recently encountered a real-life situation demonstrating this shock hazard. So how can life-threatening “approved equipment” be allowed?

The dangerous nuances of renewables

There are several factors that create this hazard, so I will set the stage so you better understand the situation. Keep in mind that, for the most part, the CE Code assumes a centrally generated, grid-distributed system; this is vastly different from locally produced power (e.g. solar), which has several sources of power and different hazard potentials.

Battery-based renewable energy systems also use very different and specific equipment with which electricians and inspectors are generally not familiar. Grid-connected solar systems are generally much simpler in design and do not have the same hazards as the multiple-power source battery-based systems.

Figure 1 shows a simplified diagram of a battery-based system’s major components. AC power sources are the inverter system and the generator. DC power systems are the batteries, the solar arrays and the inverter system when charging (there could also be wind or hydro).

In terms of safety, each power source system needs to be considered separately, then you consider all the systems in combination.

Everyone is familiar with the AC side requirements, so that’s pretty straightforward: disconnects for the inverter power and generator, bond the neutral and ground the system. This effectively means all of the metal is bonded and grounded, including the DC side components.

Now, let’s look at the DC side. Rule 64-064 does not require grounding of nominal voltage systems of less than 50V. Rule 64-070 (Appendix B) does require the negative-to-metal bonding of enclosures to provide a return path to trip overcurrent devices in the event of a fault.

Since the metal enclosures are already connected to earth/ground through the AC side, all of these types of systems would automatically be grounded. Simple enough, right? Well, let’s now throw in a solar array.

The DC supply systems from the solar arrays normally operate above 50V, so we now need to have one of the arrays’ conductors grounded (normally the negative). With the 2015 CE Code, these now need to have ground fault protection. Well, that’s easy, right? Just put in a GFI breaker or use the integral GFI protection of the available charge controllers; if there’s a ground fault, it just opens the breaker feeding the charge controllers or stops the controllers from functioning.

So what, then, is the problem?

Well, when we use the ground fault protection for the solar array, currently available equipment grounds the array through either a 1/2A breaker or internally in a charge controller through a very small jumper (Figure 2). We now need to remove the negative-to-enclosure bond so the GFI will work (Rule 64-064[7]). This now removes the path for the overcurrent devices to operate for the rest of the system, as the 1/2A breaker or 1A fuse will open really quickly, thereby removing the negative-to-enclosure bond that was provided by the GFI protection.

Well, it becomes a much bigger deal when you consider the batteries are capable of producing several thousand amperes of short circuit current and you have your hands in there! Not only that, these systems are frequently installed without a dedicated battery disconnect.

And there are other fault conditions to consider (Figure 4). Most 48V systems have the array set up with three modules in series. The open circuit voltage of these can be as high as 142vdc (ouch!). Battery-based charge controllers are available with input voltages as high as 600vdc, and remember: DC does not let go as easily as AC!

A lot of people working with this equipment could miss this, especially when you have a homeowner replacing a unit. Also, Rule 64-064(7) only allows the negative-to-ground to be internal to the equipment so, in multiple charge controller installations, you would be limited to using the breaker type of GFI protection, since the GFI protection for all the other charge controllers would not be internal to the equipment.

When I looked at this particular system (Figure 4), I turned off all the disconnects into an enclosure to check on the wiring inside. For safety’s sake, I checked for power inside for voltage on all the ungrounded conductors. All clear! Well, just to make sure, I checked the negative (supposedly grounded) conductor terminal to the metal enclosure. 100vdc! Not good.

Where is this coming from? All the power is off, right?

I went out to the array and turned off the array’s output circuit. That should do it, right? Nope, still energized.

Next, I turned off each solar string feeding the combiner. OK, that isolated the problem: it had to be in the combiner. It turns out the surge arrestor at the combiner had taken a hit and was passing the array voltage through to the metal enclosure through the green conductor.

This equipment bond now brought the open circuit voltage of the array into the building and, since the negative-to-ground bond was not there, the negative had the 100vdc between it and the equipment.
The same situation could happen where there is a source circuit fault from the array to the frame or other grounded/bonded equipment. In this case, the small jumper was not in the correct position inside the charge controller to provide even minimal negative-to-equipment bond; thus, there was no indication of a problem in the system at all.

I have brought this up with inspection agencies with whom I work, and have submitted something to the CE Code Section 64 committee. Meantime, be aware and work safely.

The president of Boyd Solar Corp., Erhard Hermann is a certified Master Electrician and Hydronic Designer who has been living off-grid since 2001 without ever using a backup generator. The experience he has gained in living daily with a totally renewable power system allows him to help others to do the same. Visit www.boydsolar.com.