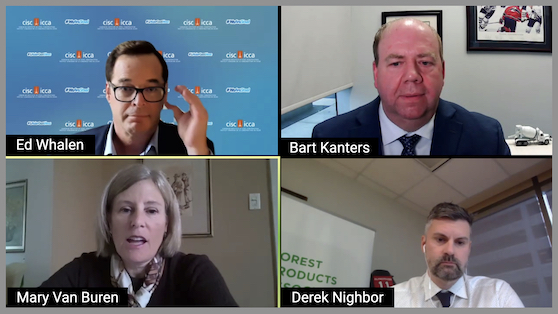 October 23, 2020 – “As the uncertainties and rapidly changing environment of Covid-19 continue to impact business decisions, supply chain management plays a critical role in the continuity of construction projects.”

It was against this backdrop that the Canadian Construction Association hosted the webinar “Construction supply chain disruptions in times of uncertainty”.

CCA president Mary Van Buren led her panelists through several discussion points, which essentially covered snapshots in time—mid-March, when the pandemic hit; the summer, when restrictions started lifting; and the current state of affairs—to better understand disruptions or shortages in raw materials (if any) and how they impacted Canada’s construction industry.

Whalen explained that steel is a global commodity, sourced from everywhere, but the bulk of what we use here comes from Canada or the United States. Unlike the other two panelists, he said Covid never really affected the steel sector with regard to supply, as there is usually several months-worth of product on-hand. Overall, the sector weathered the storm pretty well.

The Canadian forest products industry, on the other hand, was in for a heck of a ride. And this sector was hurting even before the pandemic, dealing with problems like pine beetles decimating our forests, railroad blockades, forest fires, and a serious trucker shortage.

When the pandemic hit in March, “In lumber, we saw order sheets collapse,” said Nighbor. “Big boxes were cancelling orders… there was lots of chaos in the first several weeks.”

Part of that chaos involved uncertainty over shutdowns. Should I close my mill, or stay open? Am I an essential service?

And then the strangest thing happened… something no one anticipated, said Nighbor, and that was the huge surge in lumber demand as people living under shutdown—stuck at home—started renovating. A lot of us started doing it (I’m one of them), which is what led to the tripling of lumber prices in-store… if you could even find lumber.

(In case you were wondering, I ripped out my deck because people started falling through it. Nothing to do with boredom, though it did give me something to do while on vacation. I have yet to rebuild it.)

“Concrete is pretty much a locally made product,” said Kanters, so the industry was not really affected by closed borders, but it by no means escaped unscathed.

“March and April are typically a slower time for us,” said Kanters, and that’s usually the time of year when the concrete sector gets in a bunch of maintenance work. But with the shutdowns in March and April, maintenance was not getting done, and money was not coming in.

Like the forest sector, there was uncertainty over shutdowns but, as the shutdowns lifted—especially in Quebec and Ontario—the industry found itself struggling to keep up with demand. “Currently, demand for cement is outstripping supply,” said Kanters.

Concrete typically operates on 24 to 48-hour notice, but now you need to count on at least 1 to 2 weeks for your concrete, and you may not get the full amount. Concrete producers, said Kanters, are trying to balance demand against their strained supply.

On the bright side, he noted the winter months are usually when things slow down for concrete. Kanters is hopeful the sector will be all caught up by then.

Kanters also brought up the supply issue of slag and fly ash in the concrete sector, which is not Covid-specific, but is an impending problem nonetheless.

Fly ash comes from burning coal, and with governments shutting down coal-fired generation across the country, where will the sector get this important ingredient? Slag, on the other hand, comes from steel mills, but changes in steel manufacturing methods have reduced the quantity of available slag (Whalen explained it much better), so yet another problem with a vital raw ingredient.

Much like the concrete sector, Nighbor expects the forest sector will be all caught up by the end of the year.

Van Buren then invited her panelists to share their “asks” of government. What are the needs and wants of their respective sectors?

“There are great opportunities in the construction industry,” Kanters said, which is why he would like to see government support training programs to get people into the sector, especially those whose livelihoods are severely impacted by permanent layoffs in other sectors.

One of the things Nighbor would like to see is better cooperation with the rail lines. (Transportation infrastructure overall seems a real mess in the forest products sector.) Against the backdrop of federal climate action plans, the more rail use and the less truck use, the better.

Because we are a small nation, Nighbor says Canadians “will always be free traders”, but he is hopeful that those early days of the pandemic will inspire us to look at more things we could make here rather than source from elsewhere.

Whalen is concerned about the “trending down” of new projects. He wants the feds to get money flowing to the provinces and get new projects underway.

“Our industry employs a lot of people, but we’re rapidly running out of projects,” he said.

I am glad Whalen emphasized consistent.

Both businesses and workers desire predictability, and when infrastructure spending is predictable, businesses can invest.

Similarly, the young people that the construction industry is so desperate to attract and retain may look more favourably upon the sector if it could promise a reliable paycheque and stable career year after year, not just during economic emergencies.

And, when government does spend on infrastructure during a crisis—with the dual purpose of employing Canadians while stimulating the Canadian economy—Whalen feels there should be a mechanism in place to prevent foreign companies from getting that work.

* This column was posted earlier today. Since then, CCA has uploaded a recording of the full webinar.