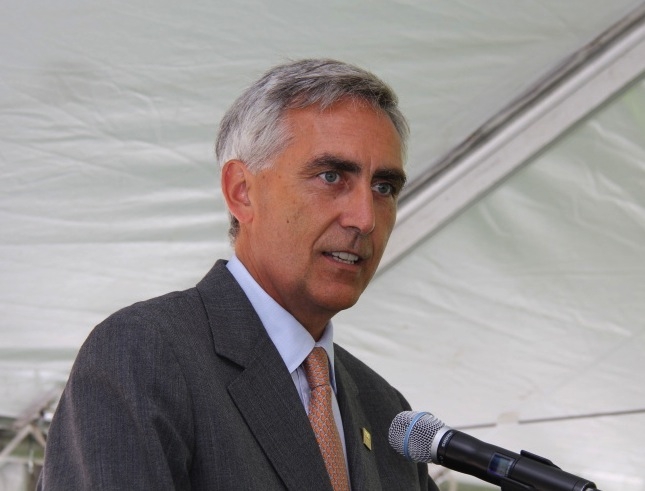 August 28, 2012 – Siemens Canada officially kicked off its 100-year anniversary today with a celebratory event at its new 110,000-sf headquarters in Oakville, Ont., which will be completed later this year. The event, attended by Siemens senior executives—including Siemens AG CEO Peter Loscher (in photo)—dignitaries, guests and Electrical Business Magazine, begins two days of celebration to “mark past accomplishments and launch the company’s second century of innovation and excellence in Canada”.

CLICK HERE to see our PHOTOS from the event!

Siemens Canada’s parent company, Siemens AG, was founded in Germany 165 years ago, and conducted its first work on the shores of Canada shortly after Confederation, laying one of the first transatlantic telegraph cables between Europe and North America—from Ireland to Halifax—in 1874. The company was chartered federally as the Siemens Company of Canada Ltd., in Montreal in 1912.

Siemens Canada says it was involved in several Canadian firsts, including the first national telex network, providing early text-based message network communication (1957); one of the first modern light rail systems in North America (Edmonton, 1975); the design and installation of the world’s first retractable roof at Toronto’s Rogers Centre (formerly SkyDome) in 1989; and the first filmless hospital in Montreal (allowing for simultaneous digital image and data viewing) in 1998.

“With a hand in so many notable projects in this country’s history, Siemens Canada has made its mark on the character of the nation,” said Robert Hardt, Siemens Canada’s CEO. “We’ve stood for innovation, quality and reliability for a century and our commitment to Canada will continue to define us in the future as we address the most challenging questions of our time.”

Siemens has 4400 employees in 61 offices and 13 manufacturing plants throughout Canada, including the new headquarters in Oakville.