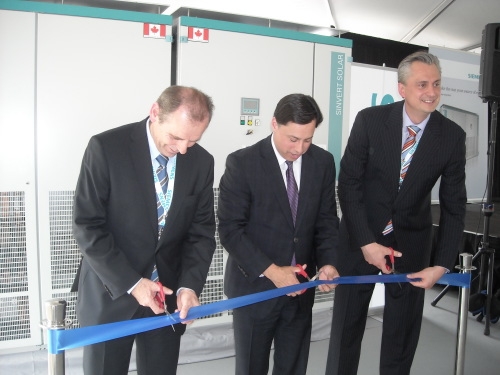 June 22, 2011 – EBMag was there yesterday when Siemens Canada’s Industry Automation division celebrated the launch of the Sinvert solar inverter at its Ontario production facility for the Canadian solar photovoltaic (PV) market.

(CLICK HERE for more photos of the event and the plant facility tour.)

“In addition to job creation, our commitment to manufacture inverters locally is another example of how Siemens is helping to create clean energy that is linked to a sustainable future,” said Joris Myny, vice president, Industry Automation and Drive Technologies, Siemens Canada.

“The first inverters to come off the production line have been shipped to solar farms in Ontario,” added Anthony Bezina, plant manager at the Siemens Burlington facility. “Our two decades of experience in local drives manufacturing enabled us to ramp up production successfully over the last months.”

The technology that Siemens is providing takes DC power as input generated from PV-Modules and converts it into AC power, which is then relayed into the grid. According to Siemens, these inverters will enable solar projects in Ontario with an annual output of approximately 250MW, or enough to power around 32,000 homes.

Siemens has invested more than $3 million (CAD) in design, test equipment and upgrades to the facility to accommodate the inverter production line, it said. As well, there are currently 10 employees directly involved in the solar PV inverter production at the facility, with another 50 skilled job positions in business development, engineering and production to support its PV business in Canada, it added.

“Ontario’s Long-Term Energy Plan is an economic plan which is building our clean energy economy, creating thousands of jobs and attracting billions of dollars of investment for Ontarians,” said Brad Duguid, Ontario’s minister of Energy. “Thank you to Siemens for being a part of this rapidly growing clean energy industry.”