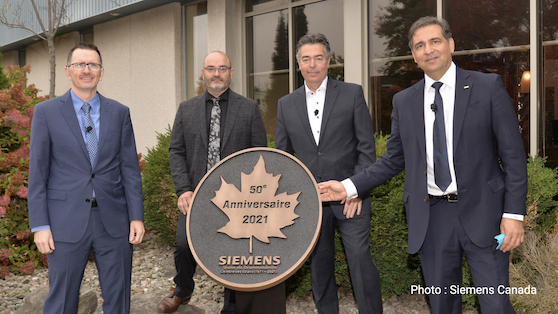 “The facility is an example of modern manufacturing, thanks in large part to a highly-skilled workforce, award-winning operational efficiency and progressive technology in-house,” said Faisal Kazi, president & CEO. “In 2021, in a time like no other, I am proud to celebrate the 50th anniversary of Siemens’ Drummondville factory.”

Today, employees, executives and customers were joined by government officials, media, and the Mayor of Drummondville, Alain Carrier, for a hybrid (in-person and live streamed) celebratory event at the plant.

“The city of Drummondville and the Société de développement économique de Drummondville would like to congratulate Siemens on its 50th anniversary and wish it success for the many years to come!” said Carrier.

The plant opened its doors in 1971 and, in 2008, was recognized as one of the top performing Siemens plants globally.

Siemens Canada says it expects Drummondville to “continue being a significant contributor to the domestic market, especially as the market moves to Industry 4.0”.

In 2021, the plant will implement the first module of Siemens PLM software, which promises to significantly enhance supply and production planning. The facility will also install co-operative robots, “thereby increasing safety and security, and enhancing the quality and consistency of outputs and the throughput of the plant”.