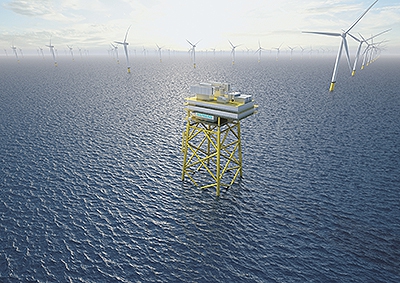 October 20, 2015 – Siemens says it has introduced a new solution for connecting offshore wind turbines to the grid. Presented at the National Maritime Conference in Bremerhaven, this direct-current technology enables a connection of offshore wind power plants far from the coast.

The platform housing the transmission technology is much smaller and more compact than before, Siemens says. Until now, these plants have been connected to the grid via large central converter platforms. With the new solution, a direct-current cable can connect several of these platforms sequentially in a wind farm and then route them to an onshore transformer substation, the company explains.

The compact design permits encapsulated high-voltage electrical equipment to be used—especially diode rectifier units (DRUs). The volume of the platform structures is reduced by four-fifths, and the weight is cut by two-thirds, according to Siemens, and as a result, costs are reduced by more than 30%. At the same time, the new solution enables transmission capacity to be increased by one-third, while transmission losses fall by one-fifth, the company adds.

A diode rectifier unit has a transmission capacity of 200MW. Typically, two DRUs are installed on one platform. Up to three of these new platforms can be connected to each other to create an offshore grid node that replaces collection platforms in the wind farms. This link enables a connection to the mainland of multiple offshore wind farms with a total capacity of up to 1200MW. The electricity is transported to a grid infeed point on land via cables. A converter station converts the direct current back into alternating current for subsequent transmission and distribution.

Thanks to high-voltage direct-current (HVDC) transmission technology, the new system’s transmission losses, including cable losses, are just 3%, Siemens says. The use of direct-current instead of alternating-current transmission to connect wind farms to the grid is made cost-effective by the new technology for cable lengths of more than about 80 km, the company notes.

The core of the new transmission technology consists of the DRU, the transformer, the smoothing reactor, and the rectifier—all combined in one tank. The use of the DRUs and the encapsulated DC-CS direct-current switchgear decreases the installation space by more than 80% compared with air-insulated technology. For the first time, Siemens says it is using biodegradable ester liquids in the DRU to insulate high-voltage direct-current equipment. Compared with mineral oils, these are not only more environmentally friendly, they are also flame-resistant, the company notes.

The new technology is being funded by the German Federal Ministry of Economics and Energy.