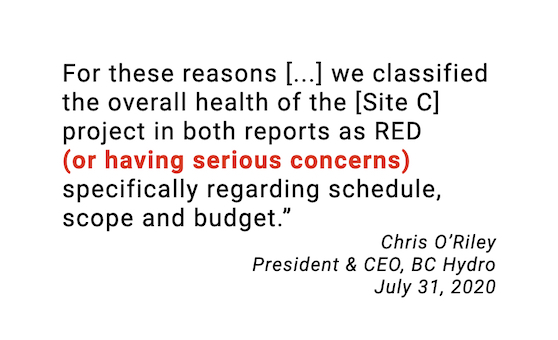 August 4, 2020 – “I am very concerned about the latest reports that BC Hydro has provided to the [BC Utilities Commission] on the Site C project,” said Bruce Ralston, Minister of Energy, Mines & Petroleum Resources, following BC Hydro’s latest project reports (July 31, 2020).

In his accompanying letter to the commission, BC Hydro president & CEO, Chris O’Riley, states “Although the pandemic began at the end of the latest reporting period, it quickly became apparent that COVID-19 would result in significant impacts to the Site C project.”

On March 18, 2020, BC Hydro announced it would substantially reduce certain work activities in response to the increasing escalation of provincial measures to manage the pandemic. Work at the dam site was scaled back to only those activities that were critical to achieve river diversion and essential services (e.g. site safety and security, and environmental protection).

Prior to the escalation of the pandemic, the project remained on schedule for the first generating unit to go into service in late 2023, and a final in-service date in 2024, O’Riley reports.

“While we remain on schedule to achieve river diversion in 2020, there is uncertainty with the project’s schedule and in-service date. This is primarily due to our ability to re-start and accelerate work that was halted due to the pandemic,” writes O’Riley.

O’Riley acknowledges the Site C project was already experiencing significant financial pressures even before the pandemic, stemming from:

In addition to these pressures, a new project risk “has materialized on the right bank”.

Toward the end of December 2019, O’Riley writes investigations and analysis of geological mapping and monitoring activities completed during construction identified that some foundation enhancements would be required to increase the stability below the powerhouse, spillway and future dam core areas.

“By the end of the March 31 reporting period, we had learned more about these geological challenges,” O’Riley says. “Based on further engineering analysis of the proposed mitigation measures, the foundation enhancement costs are anticipated to be more substantial than initially expected in January.”

Of course, pandemic-related delays will present further cost pressures on the budget.

“We take this very seriously,” added Ralston, who announced the appointment of Peter Milburn as a special advisor to work with BC Hydro and the Project Assurance Board.

“As a former deputy minister of finance and secretary to Treasury Board, I fully expect Mr. Milburn will play an important role in reviewing the project and will provide the government with independent advice,” Ralston concluded.