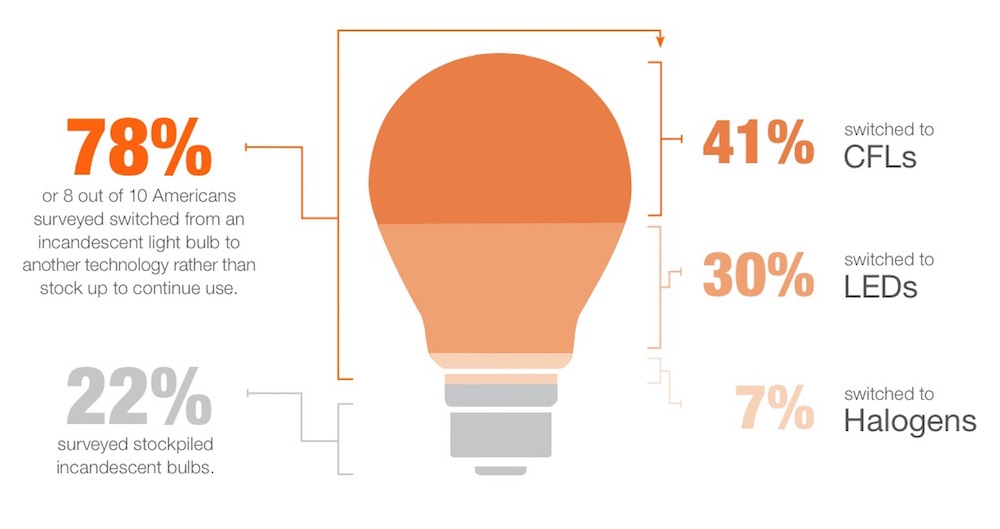 June 15, 2015 – The just-released 7th annual Socket Survey from Osram Sylvania finds 65% of Americans (this is a U.S.-based survey) have purchased LEDs for use in their homes, and the majority of them (64%) purchased LED bulbs for use in sockets for general illumination.

Of the respondents who were identified as LED bulb users, the most valued benefits of making the switch were reduced energy consumption (96%), longer bulb life (93%) and cost savings (93%).

The survey also shows 78% of Americans switched to a more energy-efficient lighting technology since the phase-out of incandescent light bulbs went into effect in January 2014 (again, this is a U.S.-based survey), with 30% of respondents indicating they made the switch to LED bulbs. The two biggest drivers for LED light bulb purchases were the lifespan of the bulb and the amount of light produced, with 95% of respondents indicating these qualities had some influence on their decision.

Most respondents (86%) believe at least one room in their home would benefit from smart lighting technology, with living rooms (58%), kitchens (49%) and bedrooms (42%) topping the list. However, the next most common hotspots were not inside the home, but in outdoor applications (40%) and in the garage (36%).

While price was not the top consideration for regular light bulb purchases, it was the top purchase influence for smart lighting products (90%), followed by the life span of the bulb (87%) and the ability to turn the bulbs On/Off remotely (74%). Though in the minority, current smart lighting owners are more likely to expand their smart homes with other technologies than non-users, with products like smart thermostats (84% versus 58%), house alarms (80% versus 51%) and door locks (80% versus 45%).

Additionally, the 7th annual Socket Survey finds that the top sources of information on lighting for consumers are in-store displays and store employees (43%), product packaging (36%) and friends and family (30%). Consumers who already use LED bulbs in the home are more likely to purchase LED bulbs again (44%) as opposed to non-LED bulb users (18%). Millennials were more likely to switch to LED bulbs following the incandescent phase-out (38%) as opposed to those over 55 (22%).

“The increasingly rapid pace of innovation makes this an exciting time to be in the lighting industry,” said Jes Munk Hansen, CEO Osram Americas and CEO Osram Lamps.