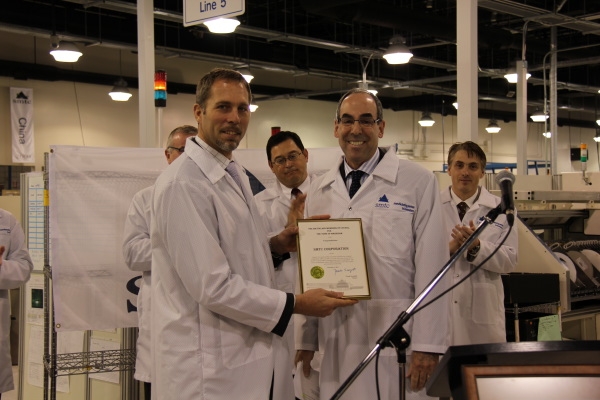 “Enecsys’ smart solar micro inverter solutions have been installed on roofs of homes and businesses in Europe, the U.S. and now in Ontario, Canada,” said Enecsys executive chair, Mossadiq Umedaly. “We are very pleased to partner with SMTC to produce our micro inverters in Ontario for the Canadian market and to become part of the Ontario renewable energy community.”

SCROLL DOWN FOR VIDEO

The December 6 launch celebration was held at the SMTC Markham facility and saw the “first” Enecsys solar micro inverter off the assembly line presented in a product handover. Speakers at the event included Claude Germain, president and co-CEO for SMTC; Louis Lalonde, vice president of Worldwide Marketing and Product Management, Enecsys. A certificate was also presented to Germain on behalf of the town of Markham to commemorate the occasion.

“The clean energy market is a major focus for SMTC’s Markham, Ontario facility, and we’re pleased that Enecsys has chosen us as their Canadian manufacturing partner,” added Germain. “We’re committed to supporting the growth of the clean technology industry here in Markham by partnering with industry leaders like Enecsys, and we have made significant investments in capital equipment to complement our engineering expertise and dedication to FIT compliance.”