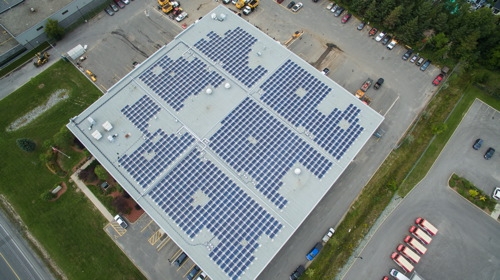 Energy Ottawa and the City of Ottawa entered into an agreement to pursue solar generation after the success of a 2010 pilot project that consisted of smaller solar systems installed at Ottawa City Hall and the city’s Integrated Transit Operations Control Centre on Belfast Road.

Once all eight solar projects are complete, the systems are expected to generate nearly 3,000,000 kWh/year; the equivalent of removing more than 300 homes from the grid annually, according to Hydro Ottawa.

“We can now tap into a renewable source of energy, which will be fed back into the power grid and will generate new revenue for the city, making this initiative fiscally prudent and environmentally responsible,” said Ottawa mayor Jim Watson.

The city is expected to receive approximately $85,000 a year or $1.7 million in revenue over the 20-year contract, the utility adds.

The Jim Durrell Recreation Centre’s 250 kW solar photovoltaic system, has an estimated output of 328,465 kWh/year (the equivalent of removing more than 30 homes from the grid annually).

Other municipal buildings included in this initiative include:

The solar roof on the operations garage on Iber Road.