Solarflare’s chief technology officers—Dr. Steve Pope and Dr. George Zimmerman—have launched “Up and Down the Network Stack”—a blog that covers topics such as enterprise technology issues, data centre trends in iSCSI and virtualization, power and energy efficiency, and network performance.

Pope
is the CTO for controllers at Solarflare. He co-founded Level 5
Networks that merged with Solarflare in 2006. Prior to Level 5, he was
a post-doctorate researcher in the field of high-speed networks and
operating systems at Olivetti Research Labs, which later became
AT&T Laboratories Cambridge. He holds a Ph.D. in computer science
from the University of Cambridge. 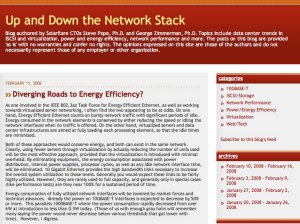 Zimmerman,
meantime, is a co-founder and the CTO for PHY technologies. He is an
expert in wireline communications and has been involved in the
development of 10GBase-T, leading the initial formation of the IEEE
10GBase-T Study Group and contributing throughout the 802.3an standards
process. He holds a Ph.D. in electrical engineering from Caltech.