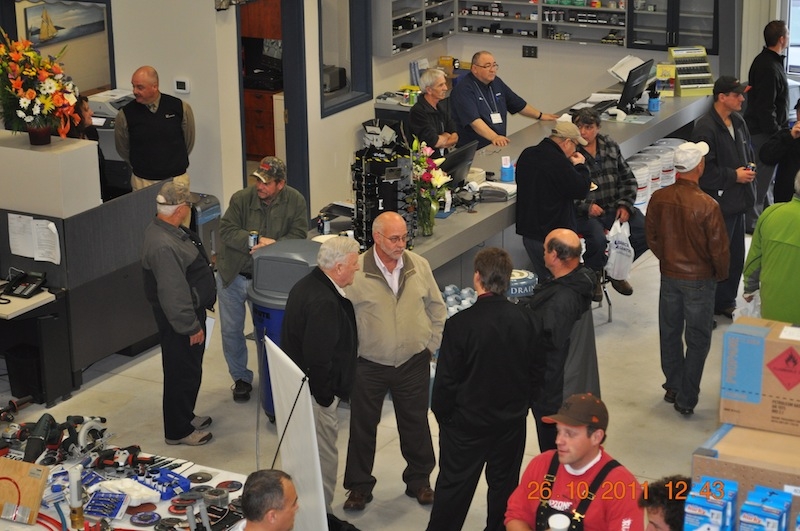 November 27, 2011 – Wholesale supplier Source Atlantic recently celebrated “a major transformation—one that demonstrates its strength and commitment to customers in industrial Cape Breton”. The sign on the building may be Source Atlantic, but manager Kevin Brushett wants everyone to know that it’s still Thornes—only better.

“We’ve changed our name and our location,” he says. “But it’s the same people and the same great service. And, even better still, we have so much more to offer.”

The Sydney branch of Source Atlantic has been operating out of Harbourside Commercial Park since June, though the official grand opening took place last month.

“Our building is new, modern and was built with the needs of our customers in mind,” said Brushett. “And, with the additional square footage, we have significantly expanded the products we carry in stock.”

Other highlights of the new building include the self-serve showroom, the outside yard for large items, and plentiful parking. Brushett says the decision to build on Wabana Court in the Harbourside Commercial Park was an easy one as the park’s extensive infrastructure is ideal for commercial and industrial businesses. “We are in the middle of everything!” he says.

“We couldn’t be more pleased to have Source Atlantic join us here,” he said. “Sydney’s landscape is undergoing a great transformation and the 2009 opening of Harbourside Park on the cleanup site of the former steel plant is an exciting development that bodes well for the future of the area. Source Atlantic’s new location in the park is an investment in the region’s continuing business development and a testament to the company’s vision for supplying the changing industrial needs of Cape Breton.”

The Thornes brand has a longstanding history dating back to 1875, when it was established as W.H. Thorne & Co. Their doors opened to the wholesale market from a building in Saint John, N.B. One location grew to three and eventually became five. It was August of 1980 that the doors to Thornes Sydney opened at the corner of George and Prince streets.

In 2001, Source Atlantic was created through the consolidation of a number of independent and established companies, with Thornes Industrial being one of those companies.

Today, Source Atlantic is a leading wholesale distributor and supply chain solutions provider, serving the industrial, military, commercial and residential markets. Source Atlantic (an Irving-owned company), has 13 branches throughout Atlantic Canada and one in Ottawa, Ont. In addition to a diverse product offering, Source provides customers with a range of technical, business and energy solutions.