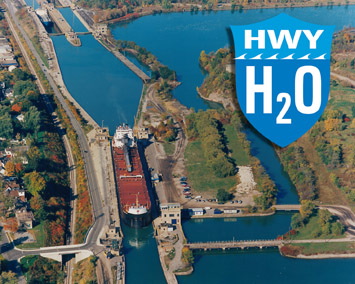 IndigoVision’s IP video technology is at the heart of a major four-year CCTV upgrade to the Welland Canal section of the St. Lawrence Seaway (dubbed Highway H2O). The all-Canadian Welland Canal is 27-miles long and connects Lake Ontario and Lake Erie. Eight giant locks along its route lift ships 326 ft between the two lakes. Remote surveillance of the vertical lifts is fundamental for traffic management and the safe operation of the locks for shipping and the public. The St. Lawrence Seaway Management Corp. monitors the entire canal system from a state-of-the-art traffic control centre.

A number of IndigoVision 8000 IP video transmitter/receiver units were
initially installed in 2004 under specific projects to support remote
bridge control along the Welland Canal. Since that time, the seaway has
continued to deploy additional 8000s, as well as installing a number of
IndigoVision’s Windows-based network video recorders (NVRs). The
various elements of the IndigoVision-based IP video system installed
along the seaway are transported via a high-bandwidth routed network
using both layer two and three segments. Network connections use a
combination of both TCP and UDP Multicast transports dependant upon
bandwidth availability. The Seaway now utilizes 8000s throughout its
extensive canal systems between the Port of Montreal and Lake Erie.