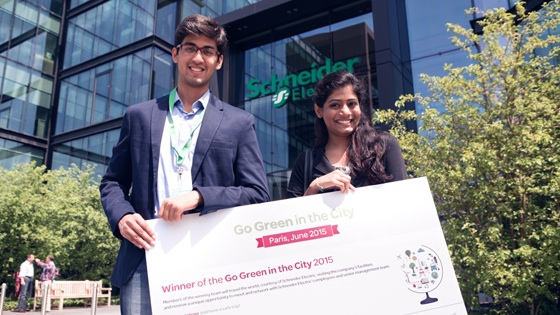 Mohamad Meraj Shaikh and Spoorthy Kotla, from the Indian Institute of Technology Kharagpur, were the winners of Go Green in the City 2015. Photo courtesy Schneider Electric

From January 15 to April 15, 2016, business and engineering bachelor, master or MBA students from all over the world are welcome to join the challenge. In teams of two (with at least one woman) they will submit a case study illustrating their ideas for energy management solutions in cities for one of the five basic business challenge topics. These are Strategy & Technology, Product Reuse & Recycle, EcoDistrict MicroGrid, Low tech Lab, and No Boundaries.

In 2015, the student team from the Indian Institute of Technology Kharagpur won the challenge for its idea of an efficient energy management application.

Attracting more than 12,800 registered participants from 168 countries with 57% of women during last year’s edition, Schneider Electric says Go Green in the City aims to educate young generations and build awareness about the need for smart energy management for sustainable cities. In 2015, India, Indonesia and Korea have been particularly active, the company notes, and highly represented among the total submissions.