Features Articles
Superman boasts solar cell efficiency of 656,000%, and Batman should be “Flatman” 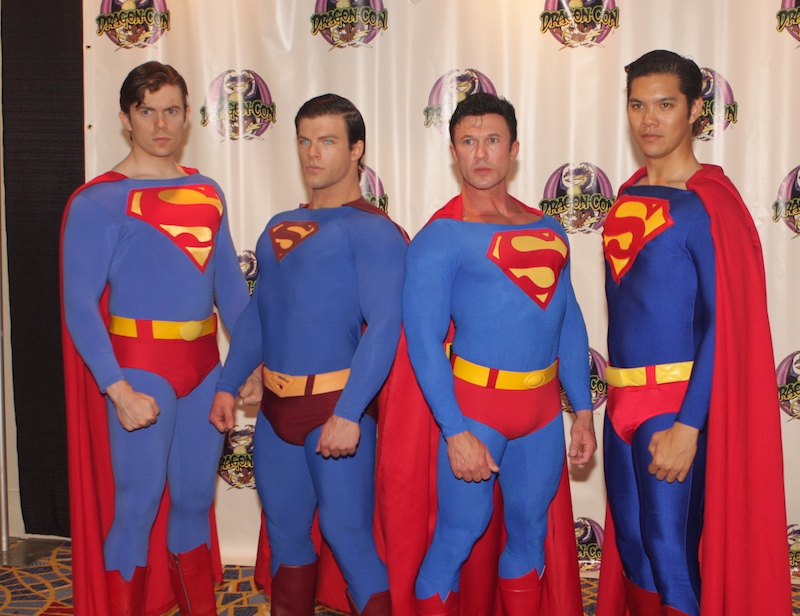 The Men of Steel by Christopher Stadler, July 2012, via Wikimedia Commons (cropped to fit)

July 11, 2016 – Assuming Superman can fly for over eight (8) hours at constant altitude—and absorb energy from our yellow sun like a solar cell—the Man of Steel couldn’t possibly take in enough sunlight to power his flight while obeying the Law of Conservation of Energy, unless he were to have a “staggeringly impossible” solar cell efficiency of 656,000%.

This is just one of many findings by University of Leicester students who were tasked with applying scientific principles to examine the feasibility of the superpowers behind renowned comic book superheroes. Ultimately, after several years of research, their research suggests Superman could be the best-equipped superhero of all, with a number of abilities including the Super Flare attack and possession of high-density muscle tissue.

Wolverine, Thor and Mystique are also in the upper echelon of superheroes, having accelerated regenerative abilities, high-energy output and being capable of gene manipulation.

Black Bolt is likely the single most destructive superhero based on a high-energy output capable of resulting in planetary annihilation.

Unfortunately for the Dark Knight, student calculations suggest Batman is the most ill-equipped superhero, who would struggle to survive a landing after gliding due to his velocity. Though his cape proves vital when gliding in comic and media depictions, the student-led research suggests gliding Batman’s velocity of around 80 km/h could prove fatal upon landing.

• The Flash would completely burn off the soles of his shoes at just at 394 m/s.

• Based on his adamantium-reinforced skeleton’s mass and density, Wolverine’s lunge force (at least 1300 N) is probably fatal.

• Iron Man’s suit would have to be 3-metres thick to stop blunt force projectiles, explosives or penetrating rounds.

The Men of Steel by Christopher Stadler, July 2012, via Wikimedia Commons (cropped to fit)

The students presented their findings in a series of short articles for the Journal of Interdisciplinary Science Topics and the Journal of Physics Special Topics, two peer-reviewed student journals run by the University’s Centre for Interdisciplinary Science and Department of Physics and Astronomy. The student-run journals are designed to give students practical experience in writing, editing, publishing and reviewing scientific papers.

“I find it a very rewarding module to teach, and I am always pleased to see my students engaging so enthusiastically with the subject,” said Dr. Cheryl Hurkett from the University of Leicester’s Centre for Interdisciplinary Science. “I encourage them to be as creative as possible with their subject choices as long as they can back it up with hard scientific facts, theories and calculations!”

CLICK HERE for some more superpower breakdowns and smackdowns!

CHART outlining pros and cons of different superheroes based on student research findings by Mohan Harihar.

PHOTO: The Men of Steel by Christopher Stadler, July 2012, via Wikimedia Commons (cropped to fit).