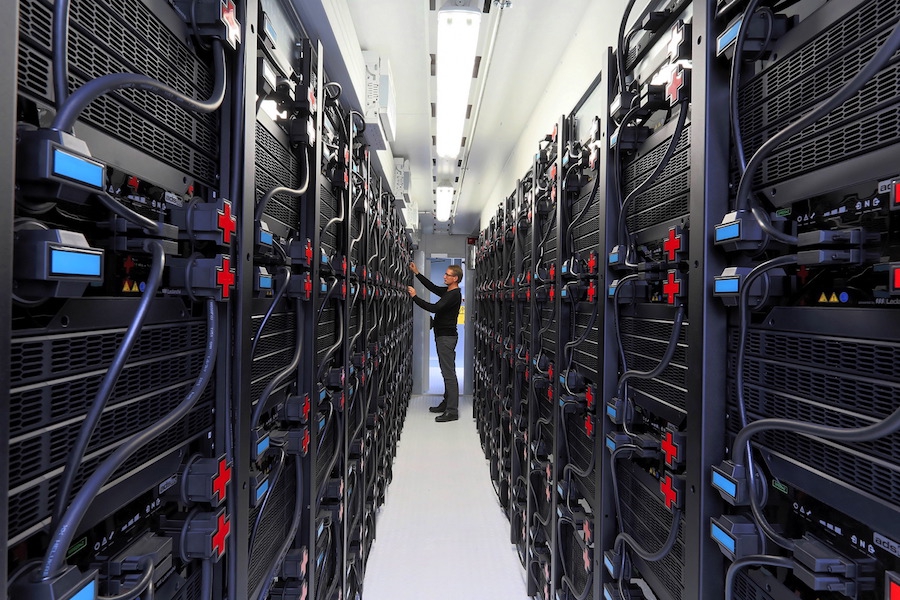 November 19, 2015 – An experimental energy management and storage system was recently inaugurated and connected to the Romande Energie-École Polytechnique Fédérale de Lausanne (EPFL) solar park in Switzerland, where researchers will use it to study new industrial-scale solutions for using renewable energies (esp. solar) and feeding them into the grid as part of the EPFL Smart Grid project.

The system will be used to test the research being carried out by prof. Mario Paolone, the head of EPFL’s Distributed Electrical Systems Laboratory. It will be able to hold up to 500 kWh while managing variations in power as a function of the sunshine. “The ability to connect reliable energy storage solutions to the grid is key for incorporating renewable energy sources in our energy mix,” said Paolone. “Because of the system’s high capacity, we will be able for the first time to carry out real-world tests on the new control methods offered by the smart grids developed at EPFL.”

The size of a shipping container, the system was developed by EPFL’s Distributed Electrical Systems Laboratory, and built around industrial-capacity Li-ion-titanate batteries from Swiss company Leclanché. The life of these cells is around 15,000 charge-discharge cycles, says EPFL, adding that 3000 cycles is more common. In addition, the cells come with patented ceramic separators, which are meant to maximize safety. It is a fully integrated solution comprising storage and energy-conversion modules, as well as software for the batteries to communicate with the EPFL engineers.

The project received financial support from the Canton of Vaud. As part of its “100 million for renewable energies and energy efficiency” program, the canton allocated about 2 million francs to Paolone’s team.

“This project represents an important milestone in the implementation of our energy policy, one of the objectives of which is to develop renewable energy resources at the local level,” said Jacqueline de Quattro, state councillor and head of the department of territorial planning and the environment.