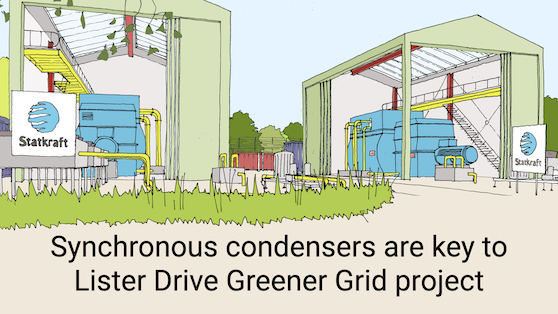 April 14, 2021 – ABB reports it has been awarded a major turnkey contract by Statkraft to design, manufacture and install two high-inertia synchronous condenser systems for the Lister Drive Greener Grid project at Liverpool in Northwest England.

Statkraft is a leading company in hydropower internationally, and Europe’s largest generator of renewable energy, reports the company. It produces power from water, wind, sun and gas, and also supplies district heating.

The Lister Drive project will play a key role in stabilizing the local grid to handle an increased amount of wind and solar power, reports ABB. This will help the UK’s National Grid meet its target of operating a zero-carbon electricity system by 2025.

Wind and solar energy sources use power conversion technologies that do not provide the inertia upon which grid operators rely to maintain grid stability, says ABB, which makes its synchronous condensers a handy solution.

The condensers are large rotating machines developed to mimic the operation of coal- or gas-fired generators by providing an alternative source of spinning inertia. They will support the grid by providing reactive power compensation and additional short-circuit power capacity, allowing more renewables to be connected to the grid.

ABB has already deployed synchronous condensers in Canada and other places to reinforce power networks. The Lister Drive project will be the first in England. It is also the first project in the world to feature a high-inertia configuration, notes ABB, whereby a 67-MVA reactive synchronous condenser is coupled with a 40-tonne flywheel that increases the instantaneously available inertia 3.5 times.

The Lister Drive project is scheduled to go online in 2022.