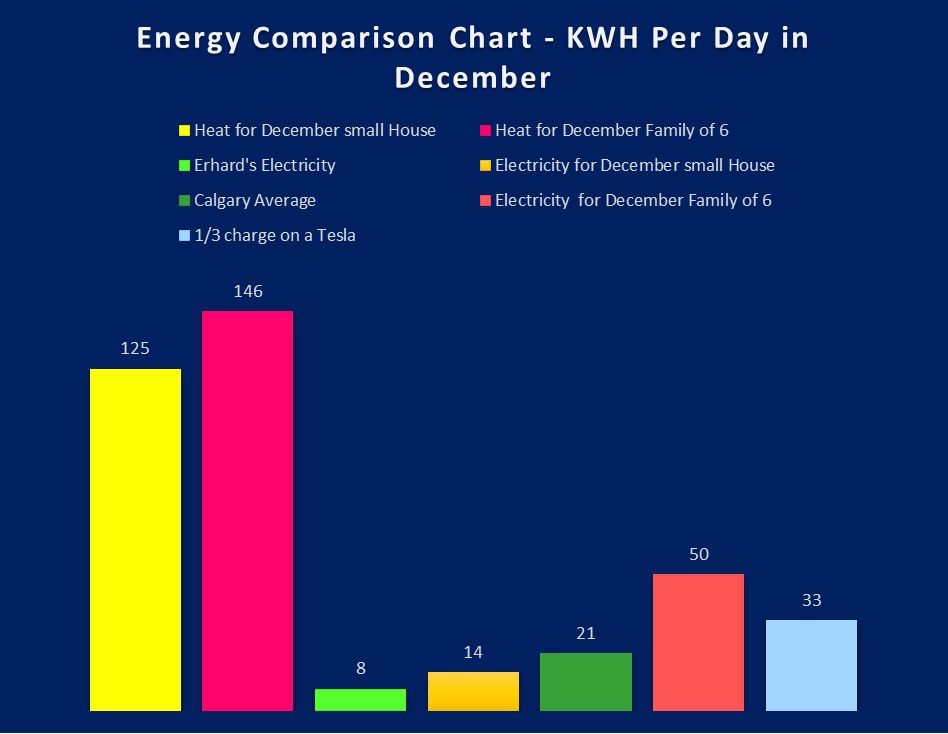 July 6, 2016 – With Alberta’s push to replace coal power plants with renewables and natural gas plants—and, on a larger scale, heat homes with renewables, charge electric vehicles and move to a greater distributed energy generation model—some serious challenges will need to be addressed.

Even further down the line, the move to a 100% renewable energy grid will take way more effort, and will be virtually the same as being off-grid.

The articles and studies I have read so far seem to focus on generation and high-voltage transmission, average values and computer modelling, but little is being written about the local distribution network.

The local network was designed and built according to historic usage patterns. As an example, a pole-mounted 50kVA (208A) transformer will typically service about 10 Alberta homes. That works out to about 5kVA or less per home (about 21 amps). We typically have 100A services here; we use electric ranges and dryers, and because these are cyclical loads that do not usually operate simultaneously, the local distribution network sizing has worked quite well.

Don’t get me wrong: I’m neither opposed to renewables nor going off-grid. I have relied totally on renewable energy for my power needs since 2001 without using any type of backup generation. I’ve done a lot of research in and on my own home and shop; my renewable energy system is among the most complex off-grid systems around, and serves as a testing ground for equipment.

My power system has two independent, standalone systems that are also connected as a microgrid for sharing power. The solar thermal heating system consists of a combination of flat plate collectors, and single- and double-wall evacuated tube collectors. These are integrated with wood-fired and gas-fired boilers, with a control system of my design.

My experience in relying totally on renewable energy for my power requirements gives me certain insights when integrating a large amount of renewables into the present power grid (and the challenges of doing so). I’m also a certified Master Electrician and certified Hydronic Designer; with my boots firmly on the ground, I try to offer realistic and practical information.

Can 100% renewables realistically serve Alberta?
Let’s look at a typical summer and winter day’s demand in Alberta (based on Alberta Electric System Operator [AESO] data), then consider what would happen were we to add about 4000MW of solar power to the grid. The Blue is the summer loading while the Green is the winter loading.

Note the highest demand is in the winter around suppertime. Solar power does not help during the period of maximum demand, and it forces natural gas generators to back off during solar production. In the winter, flush-mounted residential solar arrays could be snow-covered for weeks, or even months. See Figures 1 and 2.

Figure 3 (courtesy AESO) shows wind generation for December 2015. Note the wind is not “always blowing somewhere”. In fact, for about five consecutive days, there was virtually no wind generation in the entire province!

Typically, when renewable energy advocates talk about the price per kWh of renewables and achieving grid parity, the true cost of renewables is not really addressed. The price quoted is for the actual generation per kilowatt-hour, whereas the true cost would need to include either massive amounts of storage or backup generation so that it could be accurately compared “apples to apples” with conventional generation (which is available on demand).

Additionally, solar power generates most of its power during the summer months when demand is lower, not during peak demand. So the first challenge is to match the load to generation in conjunction with a significant amount of storage. There is going to be a lot of work done on this front, especially in jurisdictions that have a high penetration of renewables.

Bragging about Net Zero homes or “no tailpipe emissions” makes for clever headlines, but when we look at the actual operation of Alberta’s grid, we can see that we have a problem. Without significant storage, solar is typically not going to charge an EV when solar power is available, especially in the winter.

(For example, I built an off-grid charging system for a customer who wanted to drive an electric vehicle that is exclusively solar-powered, and be able to say that no power company was involved in generating or transmitting the power. In the end, the cost of the PV system far exceeded the cost of the vehicle itself and, with the cold winters we get here, his driving range is considerably reduced.)

Consider that, in most cases, an EV will be plugged in when the driver gets home, which is around suppertime and the time of highest demand. Next, look at a Net Zero home with electric heating. Now picture this scenario during an Alberta winter, when there may be weeks of cold, overcast weather and minimal solar power generation. Those customers are going to require massive amounts of energy when it is least available. Wind would be more effective in the winter, but it is still variable, and we may experience several days without it.

So, as we look at the effects these various items would have on the local distribution network, let’s consider Figure 4. We normally heat with natural gas here; were we to heat electrically with renewable energy via the grid, we would see some interesting results. (These are real numbers based on a couple of homes here in Didsbury from this past December, which was warmer overall.)

A customer of mine drives a Tesla, and he uses about 1/3 of a charge for his daily commute. His EV wall charger has the capacity to draw 80 amps at 240V. He mentioned he had to dial down the charger for it to work properly.

Being out on a rural site, he has his own dedicated upgraded transformer rated at 10kVA (41.7A), which supplies his house and outbuildings, as well as the EV charger. The standard 240V, 50A Tesla charger still draws 40 amps so, with the normal house loads, the standard 100A service may have issues, and the local distribution network could easily become overloaded. (In his case, the transformer was definitely overloaded.)

Alberta should look before it leaps
Theoretically, households can generate a lot of their own electricity, but most homes here are unsuitable for solar PV systems. Many roofs have too much shading, face the wrong way or have unsuitable rooflines, and there may not be enough room on the roof or in the mechanical room for the solar equipment (especially when storage is involved).

Were we to use electricity to heat our homes and charge our vehicles, any grid “modernization” would require replacing and upgrading most of the local distribution network. Taking the grid off-grid while maintaining reliability would involve a design quite similar to wholly off-grid systems. The generation and storage system would need to be sized for the worst case scenario, with redundancy and backup generation an ever-present requirement.

Such a plan would also require a lot more control over generation and load systems to match the two as best as possible. A significant dependence on wind power—which is not typically close to our main population centres—adds a vulnerability aspect to the grid because of the longer transmission distances, as would a dependence on interprovincial ties. Waterpower works quite well with renewables, but Alberta was not blessed with great hydro resources.

While a communication and control system to match generation with loads could theoretically work well, it would also be vulnerable to disruption.

New neighbourhoods would be the easiest to move to renewable energy dependency by installing a much more robust distribution system. Existing distribution systems—especially those underground—will present a significantly greater challenge and cost.

The president of Boyd Solar Corp., Erhard Hermann is a certified Master Electrician and Hydronic Designer who has been living off-grid since 2001 without ever using a backup generator. The experience he has gained in living daily with a totally renewable power system allows him to help others to do the same. Visit www.boydsolar.com.