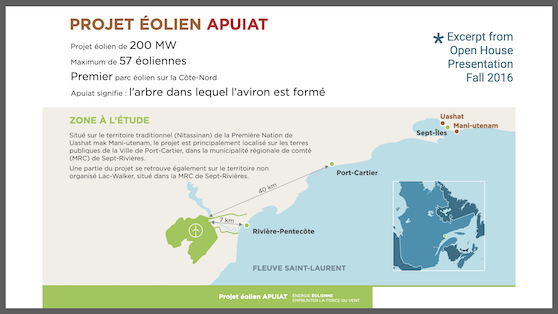 March 6, 2021 – The aptly named 200-MW Apuiat Wind Farm will become a reality in Quebec’s Côte-Nord Region. (The word “Apuiat” in Innu Aimun means “a paddle”—a symbol of moving forward together in the same direction.)

“After many months of work with our Indigenous partners, I am proud to present a win-win project for the Innu communities, for Quebec and for the planet. This is excellent news for the entire wind energy sector, in which costs have come down considerably,” said Premier François Legault.

“Apuiat is the result of an Innu idea, a desire to build collective wealth. For the first time, across our nation, we are the master builders of a large project of benefit to the Innu and to Quebecers,” said Chief Mike Mckenzie. “History is taking place right before our eyes; we are writing it together: the Innu, the people of the Côte-Nord Region and Quebecers.”

The newest version of the project scope provides for a 17% reduction in the electricity price, as compared to that presented in 2018.

The agreement concluded provides for the signing of a 30-year contract to purchase the electricity that will be produced by the Apuiat wind farm. The contract between Hydro-Quebec Production and Parc éolien Apuiat SEC—a company jointly held by the Innu communities and Boralex—provides for the electricity to be bought at a cost of approx. $0.06/kWh.

The wind farm will be built on the traditional territory (Nitassinan) of the Uashat mak Mani-utenam First Nation, and on public lands in the City of Port-Cartier in the Côte-Nord Region.

The Innu communities and Boralex are 50-50 partners in the project, equally sharing the profits generated by the sale of electricity over the life of the project.

“Apuiat is more than just a wind farm. It involves 30 years of revenues for our communities, and a breeze of fresh air for the economy of the Côte-Nord Region,” added Chief Martin Dufour. “The Innu have the potential and the willingness to participate in Quebec’s economic development, and we have much to offer. Although Apuiat is our first national project, it will certainly not be the last.”

The community of Uashat mak Mani-utenam and the City of Port-Cartier will each receive annual royalties as host communities.

The wind farm will lead to the creation of about 300 jobs during construction, and about 10 permanent jobs during operation. Construction is set to begin Summer 2022, with commissioning anticipated in December 2024.