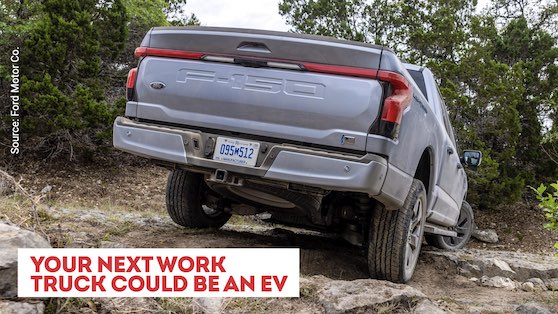 June 24, 2022 – Ford Motor Co. says the truck of the future is here, which it hails as “the smartest, most innovative truck Ford has ever built”. Announced back in Spring 2021, the all-electric F-150 Lightning started rolling off the line this year.

Lightning targets 563 hp and 775 lb-ft of “nearly instantaneous torque”, a maximum 2000 lb of payload in the standard-range model, and a maximum 10,000 lb of available towing capacity on XLT and Lariat trucks with the extended-range battery and Max Trailer Tow Package.

“We’re not here to make an electric truck for the few,” said Ford’s Kumar Galhotra. “Ford is committed to building one that solves real problems for real people.”

As part of available Ford Co-Pilot360 technology, BlueCruise allows for hands-free driving on more than 160,000 km of pre-qualified divided highways in Canada and the U.S., with more Hands-Free Blue Zones to come in the future.

Other tech includes available Onboard Scales, which uses the truck’s sensors to estimate payload and inform customers on how much they’re hauling. Since payload can impact range, Onboard Scales is integrated with Intelligent Range to help ensure F-150 Lightning gives an accurate estimate of how far you can drive.

This truck debuts available Pro Trailer Hitch Assist, which automatically controls steering, throttle and brake inputs to make hitching trailers easier. Also making its debut on select vehicles is available Phone As A Key. When activated, this allows customers to lock, unlock and start their truck without taking their phone out of their pocket or using a fob.

These features and more will get better over time, says the automaker, with Ford Power-Up software updates.

“It really is the smartest F-150 we’ve ever made.” said Darren Palmer. “F-150 Lightning offers an immersive touchscreen, giving our customers all the info they want in an instant […]”

Making its truck debut in the Lariat and Platinum series is SYNC 4A—an interface that is designed to adapt to driver behaviour. SYNC 4A employs natural voice control, cloud-connected navigation and wireless access to your favourite services. Elevating the digital experience further is the 12-in. instrument cluster, which features a customizable interface and animated graphics.

Debuting on the F-150 Lightning is available Ford Intelligent Backup Power; with the ability to offload 9.6 kW of power, this feature helps keeps the lights on during an outage. Enabled by the available 80A Ford Charge Station Pro and home management system, the Backup Power automatically kicks in to power your house. Once power is restored, the truck automatically reverts to charging its battery.

In the future, Ford plans to introduce Ford Intelligent Power, which will allow you to use your truck to power your home during high-cost, peak-energy hours.

With enhanced Pro Power Onboard, you can take advantage of built-in electrical outlets to directly power a variety of tools, electronics and appliances.

Under the hood, where the engine would normally be located, is the front trunk or “frunk”, good for 400 lb of payload.

Rugged underbody protection keeps the battery safe, with metal skid plates shielding both the battery and inboard motors from tough terrain. The battery itself is secured inside a waterproof casing surrounded by crash-absorption protection, and has been tested down to -40 C.

The truck offers an 80A charge station as included equipment, which charges an extended-range truck from 15% to 100% in about eight hours.

But don’t expect to get one any time soon. According to Ford Motor Co., the current model year of the all-electric F-150 Lightning pickups (all series) is no longer available for retail order due to high demand.