The Industrial Conservation Initiative (ICI), a program that began in Ontario back in 2010 to allow large consumers to save on the Global Adjustment cost by reducing consumption during provincial peak events, has been under review lately by government and stakeholders, leaving uncertainty in its future. The following article focuses on the impact of the ICI program expansion in 2017 on Ontario’s electricity market using data made available from the IESO website.

When the ICI began in 2010, the eligibility requirement was a building that had an average 12-month peak demand of 5-MW or greater. In 2015, the program slightly expanded by lowering the demand requirement to 3-MW. In January 2017, the program further expanded to allow buildings with a 1-MW or greater demand. In April 2017, the most recent change was made to allow specific manufacturing/industrial buildings to opt in with a 500-kW (0.5-MW) average annual peak demand.

The two changes in early 2017 had profound effects on the ICI program, allowing a much larger amount of buildings to now be eligible, changing the dynamics of the provincial peaks and a continued shift of electricity costs to the smaller Class B rate payers.

Global Adjustment: Class A vs B

The ICI program is centred around the Global Adjustment (GA) fee, which is paid by both Class A rate payers (those that opt in to the ICI), or by the smaller-medium buildings that aren’t eligible for the ICI program (50-1,000-kW demand), known as Class B. As shown below, the Class B buildings pay far more towards the GA than Class A.

From the above, we also see that in 2017 and 2018, the Class A rate payers are now paying a higher percentage towards the total GA amount, suggesting that more buildings did in fact opt in to the ICI with the new lower peak demand eligibility requirements.

The Global Adjustment data from the IESO was first analyzed to determine how many buildings are participating in the ICI. The methodology included determining a province wide Peak Demand Factor (PDF) that can be used to determine the average cumulative demand by all ICI participants during the top 5 peak days. 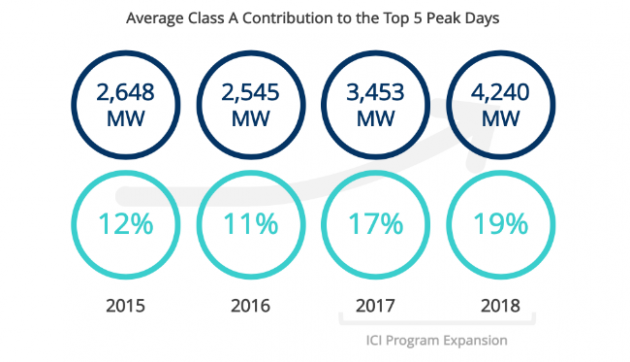 The above graphic illustrates that in 2017, after the ICI program expansion, participants grew by a significant amount with approx. 6% of the provincial peak day demand shifting from Class B to Class A. In 2018, participation grew slightly more which could be attributed to more organizations now being aware of the new ICI program and rules, or simply that buildings didn’t perform as well during the provincial peak days. Overall, since the 2017 ICI expansion, a significant amount of the electrical demand during the provincial peaks shifted from Class B to Class A rate payers…..but how did the costs shift?

If we go back to the first line of this article, it was described that the ICI was introduced so larger consumers could save on Global Adjustment costs by lowering their demand during the provincial peaks. The savings are great for ICI participants, but the overall GA amount doesn’t magically get reduced, it still has to be paid. The ICI mechanism simply “shifts” costs to Class B rate payers, and as ICI participation grows (and more buildings get better at reducing peaks), costs will continue to shift down to Class B rate payers to cover the remainder of the GA bill. The cost savings for Class A rate payers is outlined below when comparing the percentage that ICI participants pay towards the GA in relation to their total annual electricity consumption. 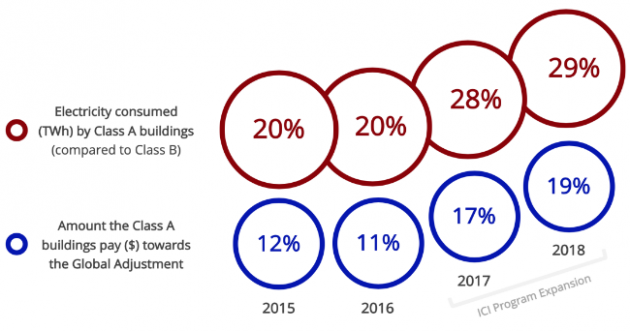 The above paints an important picture, showing that the Class A buildings pay a significantly less percentage towards the GA compared to the amount of electricity they consume annually. In 2018 for example, with the ICI expansion well underway, Class A rate payers were consuming nearly 1/3rd of the electricity compared to Class B, while only paying about 1/5th of the Global Adjustment amount, further illustrated below. 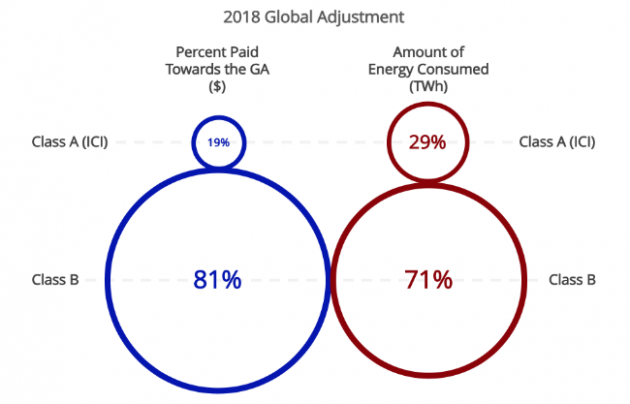 The theme of the debate is clear: Class A buildings pay less per unit of energy than Class B does (Class A, 2018: $51/MWh | Class B, 2018: $88/MWh). The imbalance between energy consumption and costs leads to a constant debate on the fairness of the ICI program. As ICI participants get better at reducing peaks, costs will only continue to shift even more to Class B rate payers.

Throughout 2019, the Ontario government held electricity price consultations for industrial stakeholders to ensure “Ontario’s industrial consumers have a fair and stable pricing framework that allows them to focus on their core business”. The main theme of the consultation was centred around the ICI program, with key points summarized below:

The ICI program is still intact with no clear direction from the Ontario government on next steps with industrial rates moving forward. The newest top 5 peaks for the 2019-2020 peak setting period have likely been set, so organizations should start understanding how they performed this past summer to start budgeting for the new Class A costs starting in July 2020.

Should the ICI remain as is? If not, what changes would you make to the program? Would you get rid of it completely and introduce a separate incentive for those that have already invested in generation/storage? Let me know your thoughts in the comments!

I recently found data on the IESO website containing 4-years of information on monthly electricity consumption and global adjustment costs for Class A and Class B rate payers. I decided to analyze the data to see the effects of the 2017 ICI program expansion on Ontario’s electricity market. The timing of this article worked out great as it closely relates to the recent industrial electricity price consultations between stakeholders and government. I added a summary of the consultation at the bottom of the article. Let me know your thoughts on the article or thoughts on the ICI program in the comments!

Greg Young is a mechanical engineering graduate from the University of Guelph, with a specialization in sustainable energy systems. Greg now has a career in the energy industry and writes articles on various energy sector topics in his spare time.