One thing is certain: utilities that are proactive in developing both the B2B and B2C markets stand to gain considerably. 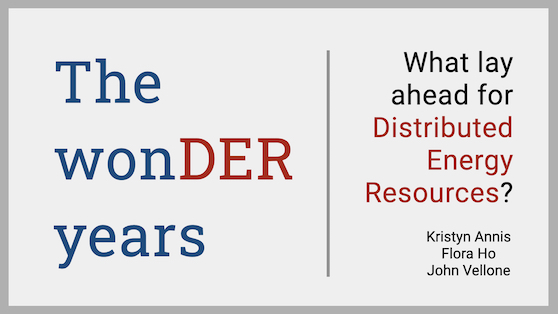 The landscape for distributed energy resources (DERs) is evolving rapidly. Distribution-connected generators, aggregators of batteries and other smart home devices, and industrial and large commercial consumers adding energy generation and batteries to better mange their energy profiles all stand to benefit.

Pushed mostly by innovators, both regulators and market operators are developing new tools to not only integrate new DERs, but also leverage existing ones. In some cases, utilities are also actively participating.

In moves the energy media is calling “groundbreaking” and “game changing”, regulators are pushing to open up wholesale markets to DERs.

Why DERs, and why now?

As our grids get smarter, resources become increasingly nimble, helping to support—and, in some cases, upend—large-scale energy generation resources.

A distributed energy resource is a resource that:

Modern grids are already connected to millions of existing DERs, and their market penetration is increasing. DERs are proliferating due to advances in technology, which are decreasing costs and allowing developers to meet emerging customer preferences. For example, an industrial consumer may want to add a battery to shave peak load, while smart home owners can benefit by participating in energy management programs run by aggregators. By integrating DERs, utilities can also help manage their load.

The number of DERs has also reached critical mass, to the point where utilities, regional transmission operators (RTOs) and independent system operators (ISOs) see them as potential valuable resources.

According to the chair of Federal Energy Regulatory Commission (FERC in the U.S.), projections indicate that anywhere from 65 GW to 180 GW of DERs could be added to the country’s power grids over the next four years.[2]

To put that into perspective, Ontario’s installed generation capacity is about 39,864 MW. The challenge is how to create the structures—physical, market and regulatory—that will harness the potential of DERs in a safe, cost-effective and reliable manner.

The Federal Energy Regulatory Commission started looking at rule changes to accommodate DERs as early as 2016. Four years later, and we have FERC Order 2222 “Participation of distributed energy resource aggregations in markets operated by regional transmission organizations and independent system operators”, which is being coined as a game changer.[3]

Although not legally binding in Canada, the rules published by FERC often shape the development of the energy markets in the U.S., and eventually make their way into Canadian markets. Both the Ontario Energy Board (OEB) and IESO often reference FERC rules or orders in their decisions or white papers.

Order 2222 requires each RTO/ISO to revise its tariff (rules of operation) to ensure its market rules facilitate the participation of DER aggregations in wholesale markets. In other words, groups of DERs will be able to participate in wholesale markets as a single resource represented by their aggregator.

Order 2222 is technology neutral, and the term “distributed energy resource” is broadly defined.[4] It requires RTO/ISO’s tariff provisions to, among other things, establish minimum size requirements for DER aggregations that do not exceed 100 kW, as well as address locational requirements, bidding parameters, metering and telemetry requirements, and coordination between relevant parties and authorities.

States do not have the option of opting out of the market structures that ISOs/RTOs will create to comply with Order 2222 (a single RTO/ISO will cover numerous states). (Only small utilities with annual electricity sales less than 4 million MWh can opt out. This exemption recognizes that utilities of that size likely cannot shoulder the costs or complexities of compliance.)

Compliance with Order 2222 will indeed be complex, and highly technical. The main challenge facing utilities and state regulators will be how to manage interconnection rules that allow DERs to operate in wholesale markets without destabilizing distribution grids.

Jurisdictional issues will also have to be addressed; utilities control the distribution grids that connect DERs while state regulators (i.e. public utility commissions [PUCs]) have their own set of rules with which utilities have to comply. It may be that the cost and complexities shouldered by DERs to participate in the wholesale market are too high—at least for the time being.

As with many provinces in Canada, PUCs run several different types of programs aimed at DERs that, for many of them, are simple and lucrative. That said, the aggregated potential of DERs is now impossible to ignore. Artificial intelligence and technological advancements will only make it easier for aggregations to participate effectively in wholesale markets.

The roster of aggregators emerging on the energy scene are also hard to ignore. Take Enel X or Sidewalk Infrastructure Partners (SIP, a Google subsidiary), for example. Energy is technology, and the technology giants are now major players.

In fact, SIP recently partnered with OhmConnect to create the largest virtual power plant by aggregating energy-saving homes and smart devices.[5] Currently acting only as as demand-response, the “Resi-Station” was able to deliver almost 1 GWh of total energy reduction during California’s energy emergency this summer. OhmConnect did this by toggling its customers’ smart devices and appliances Off/On more than 739,000 times!

In so doing, it paid out about $1 million to its customers (electricity prices in California are among North America’s highest). Once completed, the Resi-Station will be able to provide up to 5 GWh of energy conservation. To be clear, that’s 5 GWh of energy that doesn’t need to be supplied by other generators.

A much smaller market than any of the U.S. markets, Ontario has seen developments for DERs both at IESO and at OEB.

IESO released its first DER-related white paper, “Part 1: Conceptual models for DERs” in October 2019, followed by “Part 2: Options to enhance DER participation” about a year later. Part 2 breaks down the options to DER entry/participation in the IESO administered markets (IAMs) and categorizes them as:

• Merits further consideration
• Pilot
• Not worth pursuing at this time

Part 2 also provides the latest data on OEB-regulated and Ontario Electricity Financial Corp. and IESO-contracted DERs, which total just over 3700 MW of nameplate capacity.[6] Of that, about 900 MW are DERs that are less than 1 MW in size.[7] The current size threshold to participate in the IAMs is 1 MW.

The options and their treatment are laid out in Part 2, which has been summarized at a high level for convenience below:

Clarify existing rules for aggregators – IESO will consider clarifying market rules for prospective DER aggregators, and set expectations on how applications will be vetted.

While IESO has made progress in identifying barriers to existing DERs, what’s missing is a discussion on how to create the market structures to incent new DER build-out—potentially on a massive scale. The reason for this omission is unclear. Either IESO anticipates minimal DER build-out in the immediate future, or it believes future DERs will work well within what is being proposed.

On the regulatory front, the Ontario Energy Board initiated two consultations on in March 2019: “Responding to distributed energy resources” (EB-2018-0288) and “Utility remuneration” (EB-2018-0287).

OEB’s intention in the DER consultation is to develop a more comprehensive regulatory framework that facilitates investment and operation of DERs on the basis of value to consumers, and supports effective DER integration so the benefits of sector evolution can be realized.[8]

Through the “Utility remuneration” consultation, OEB seeks to identify how to remunerate utilities in ways that make them indifferent to traditional or innovative solutions, better supports their pursuit of least-cost solutions, strengthens their focus on long-term value, and requires them to reflect the impact of sector evolution in their system planning and operations.[9]

In addition to these two consultations, OEB launched a DER consultation “Connections review” (EB-2019-0207) in August 2019, which aims to review its requirements with regard to the connection of DERs by licensed electricity distributors.

The purpose of this initiative is to identify any barriers to the connection of DERs and, where appropriate, standardize and improve the connection process.[10] In its latest guidance, OEB provided sample forms for aiding discussions between DER proponents and distributors at the initial stages of a DER connection project. It also provided a sample protection philosophy for use with DER connection projects intended for self-supply that use non-exporting, inverter-based technologies.[11]

The DER acronym could also stand for Disruptive Energy Resources. As more DERs come onto the market and our grids become increasingly digitized, the opportunities—and challenges—posed by integrating DERs into our electricity supply will also grow.

One way to look at DERs conceptually is by classifying them as B2B and B2C. Utilities will likely have an easier time applying their traditional commercial and governance models to the B2B market. It is in this area in which Order 2222 and similar future Canadian-based market rules will apply.

The B2C market is still very much in flux. The penetration of electric vehicles, smart appliances, home batteries and technologies that have yet to be invented will dictate the extent to which utilities will need to innovate and adapt.

Aggregators will also play an important role, as will the desire for customers to trade amongst each other and personalize their energy profile.

One thing is certain: utilities that are proactive in developing both the B2B and B2C markets stand to gain considerably. Utilities that not only support DER growth, but enable it, could see the value of their distribution systems substantially increase as more participants seek to utilize utility-owned infrastructure to make money or manage their electricity costs.

Utilities must be supported by regulatory bodies and ISOs/RTOs, as well as multiple levels of government. As this article outlines, progress is being made on this front.

Finally, DERs can greatly reduce greenhouse gas emissions, and could help provincial and federal governments who are looking to meet self-imposed and internationally binding targets.

Kristyn Annis is part of BLG’s Electricity Markets Group and Indigenous Law Group. She has a practice spanning corporate commercial, project development and M&A in the energy sector, working for both Indigenous and non-Indigenous clients.

Flora Ho is an associate at BLG in the Electricity Markets Group, with a practice focused on corporate/commercial, regulatory law and matters relating to the electricity sector.

John Vellone is a partner in BLG’s Electricity Markets Group. He has a comprehensive energy and technology law practice encompassing a breadth of corporate, commercial and regulatory issues, with a particular focus on Canadian electricity markets and infrastructure revitalization.

11. This is summarized in OEB’s latest guidance on distributed energy resources connections, by John Vellone and Flora Ho, December 3, 2020.