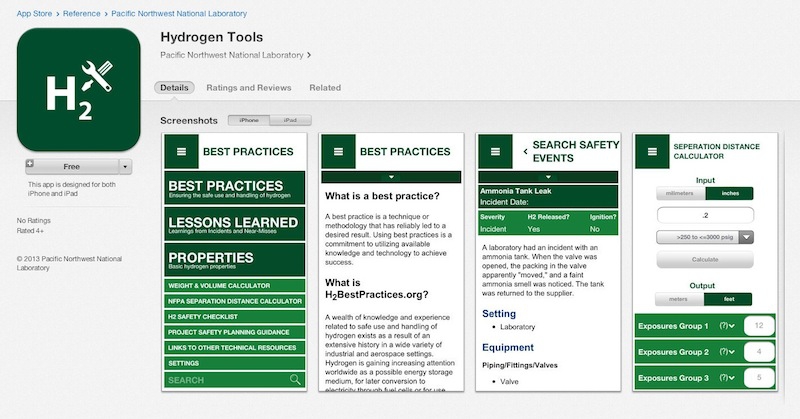 Nick Barilo, the PNNL project manager who led the app team, said fuel cells are becoming more common in a variety of applications—as back-up energy sources in buildings and vehicles, and in warehouses, where they are often used to power forklifts. Fuel cells generate electricity by driving electrochemical reactions using hydrogen and air. The only byproducts are heat and water.

“With hydrogen being deployed in a greater number of applications, it’s the perfect time to make a safety tool like this app broadly available,” said Barilo. “Many people are unfamiliar with the technology, and this app is intended to make the information they need available at their fingertips.”

Created with the support of DoE’s Office of Energy Efficiency and Renewable Energy, Hydrogen Tools incorporate a variety of resources and web-based content to help those involved in designing, approving or using hydrogen fuel cell systems and facilities. It includes information about hydrogen ventilation, safe distances and pressures for storing hydrogen, and best practices for safely handling hydrogen.

Hydrogen Tools is available for free download through the Apple App Store.