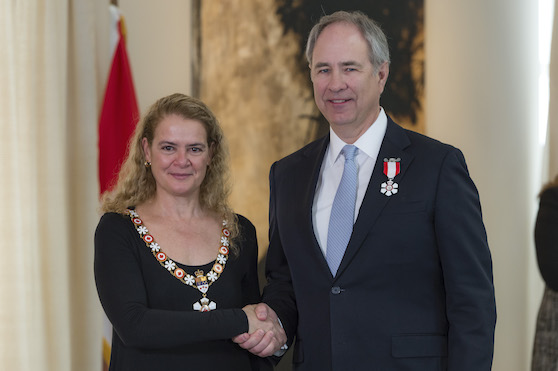 Her Excellency the Right Honourable Julie Payette, 29th Governor General of Canada, (2017- 2021) (at left) presented the Member insignia of the Order of Canada to Timothy E. MacDonald, C.M. (at right) during a ceremony at the Citadelle of Québec, on February 12, 2019. SOURCE: MCpl Mathieu Gaudreault, Rideau Hall © Her Majesty The Queen in Right of Canada represented by the Office of the Secretary to the Governor General, 2019. Reproduced with the permission of OSGG, 2021.

Tim started his career with Ideal Supply in 1981, working in several different capacities until he succeeded his father as president in 1995. Tim became CEO in 2000.

“Tim has provided visionary leadership to the company throughout his many years and—together with his sister, Joan, and brother, John (Satch)—continued to grow the company into the leading distributor of electrical and auto parts serving their markets,” reads the memo from Deschênes Group (of which Ideal became a member in 2016).

Tim also became a Member of the Order of Canada (awarded May 2018, invested February 2019).

The Office of the Governor General of Canada shares this information about Tim:

Timothy MacDonald is a community builder. President of Ideal Supply, one of southwestern Ontario’s largest and most reputable employers, he has promoted a company culture of philanthropy and volunteerism. Dedicated to giving back, he has been a founder, board leader and patron of numerous local and regional organizations focused on enterprise, heritage preservation, the arts and education. His engagement extends beyond his local community as co-founder of the Arctic Research Foundation, which was instrumental in the discovery of the Franklin Expedition’s lost ships.

“Over the years, Tim has garnered the respect of employees, customers and suppliers because of his professional, fair and loyal approach to relationships and business,” adds Deschênes Group. “Please join us in wishing Tim and his wife, Alexandra, a long, healthy and well-deserved retirement as they transition into their new stage of life.”

(Tim, on a personal note, I will miss seeing you at AD North American meetings, Electro-Federation Canada events and, of course, the Ideal Supply tradeshows in Stratford. Best wishes, my friend! You are a true gentleman.)

Succeeding Tim is Howie Pruden, who has been promoted to the position of vice-president and general manager, effective June 30.

Celebrating its 95th year of operation this year, Ideal Supply is an independent electrical distributor based in Listowel, Ont., and is listed among Canada’s Best Managed Companies. It is a Deschenes Group company, and a member of North American buying group AD.