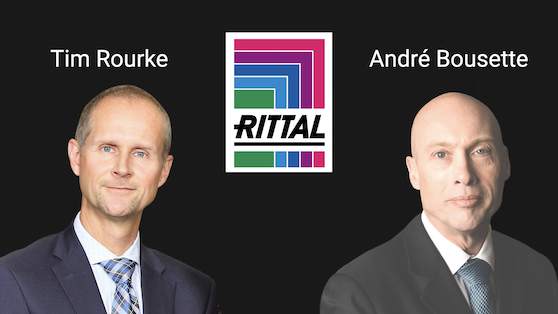 December 9, 2020 – Rittal Systems Ltd., Canada, announced Tim Rourke is stepping down as president, and Andre Bousette will step into his role effective January 1, 2021.

“I am proud to have worked with André for nearly 30 years,” said Tim. “I extend my personal, heartfelt congratulations and deepest appreciation to André, and I am confident that Rittal Systems Ltd. will grow to new heights under [his] capable leadership…”

Tim has been with the company for 25 years, starting as an outside sales rep for Eastern and Northern Ontario. In 1997, he was promoted to regional sales manager for Ontario, followed by a stint as regional sales manager for Western Canada. In 2002, he moved into a business development role, then business operation manager in 2010. In 2015, he assumed the role of president of Rittal Systems Ltd.