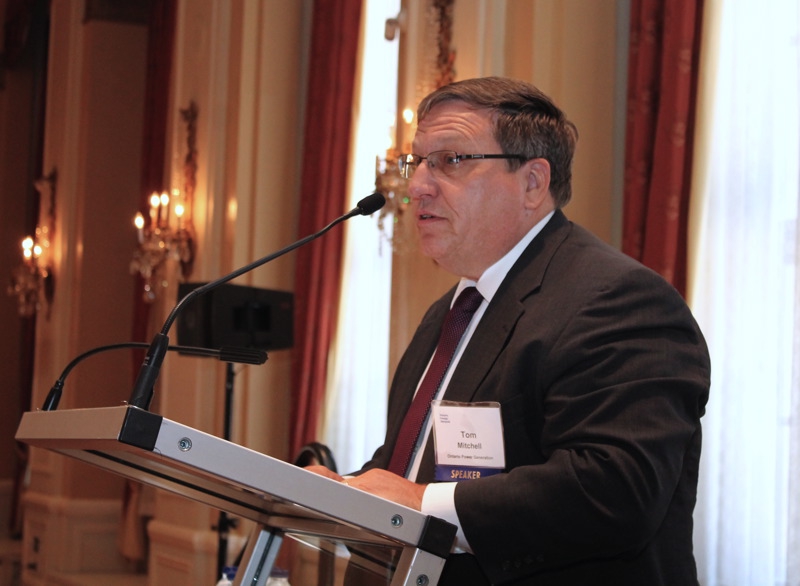 May 7, 2015 – The room was packed yesterday at the latest Ontario Energy Network luncheon, as the province’s power players gathered to hear from outgoing president & CEO of Ontario Power Generation, Tom Mitchell.

This event was likely Mitchell’s last address in front of the Ontario Energy Network and, who knows? … maybe among his last addresses as OPG’s leader, period.

And he went out with humility. With style.

He was introduced to the podium by Chief Norm Hardisty of the Moose Cree First Nation, with whom OPG collaborated for the Lower Mattagami Project (the First Nation will have up to a 25% equity interest in the project).

As Hardisty invited Mitchell up to the podium, he spoke fondly of the working relationship Moose Cree has enjoyed with OPG, and with Mitchell specifically, referring to him as a friend.

And when Mitchell took to the stage, he could have taken the opportunity to talk about himself. (He’s leaving as soon as OPG finds a suitable replacement [and likely some transition period] so, really, he can say whatever he wants.) Instead, he opened his address with one of his “favourite” subjects, “the people of OPG”, whom he credits with building this province.

In fact, he referred to the people of OPG throughout his address, noting that last year was OPG’s best ever for workplace health & safety, despite all the changes and reorganization occurring within the company.

On the subject of the Lower Mattagami Project and OPG’s relationship with Moose Cree, Mitchell said, “Treating First Nations with respect and fairness is the right thing to do.” He’s right. Plain and simple.

On the Darlington Refurbishment project, Mitchell spoke with great pride about the new OPG Energy Centre where, among other things, you will find a full-scale reactor face mock-up that sports its own ‘Selfie Zone’.

“I’ve never taken a selfie,” Mitchell admitted, “But if I did, it would be in front of that lovely reactor face.” (The next opportunity to take your own selfie, as I have (last photo), is at the next Energy Centre Open House, June 6-7.)

Mitchell went on to discuss his affinity for Durham Region, in which Pickering and Darlington nuclear plants are located, and the University of Ontario Institute of Technology (UOIT), also in Durham.

He then announced that he and his wife are starting a bursary at UOIT, which will give preference to First Nations and Métis applicants. And, rather than any retirement gifts, he invited those in attendance to support the bursary instead. Thanking him for this gesture was UOIT president Tim McTierman.

Tom Mitchell is a class act. Best of luck in your retirement.

Be sure to visit www.ontarioenergynetwork.org for upcoming opportunities to network with Ontario’s power players.