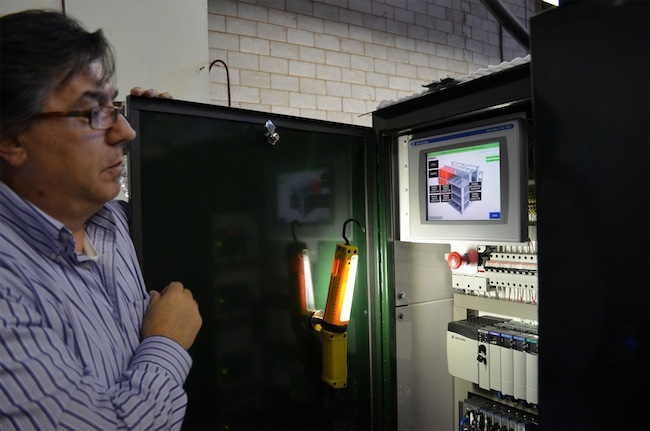 January 25, 2013 – A consortium led by eCamion—along with Toronto Hydro, the University of Toronto, and Dow Kokam—has unveiled what it says is the first energy storage system installed directly into an urban community. Located at the Roding Arena and Community Centre in North York, Ont., the community energy storage (CES) system will allow Toronto Hydro to monitor this technology, and help validate its benefits to Toronto’s electrical grid, it explained.

Moving forward, the storage unit aims to help alleviate stress on the grid during peak times, while providing power to connected homes in the event of a power interruption from the station. It comes equipped with ‘brains’ to independently monitor grid conditions and respond by taking in electricity during off-peak times, or releasing energy if needed, it said.

The unit is designed to provide 250 kWh/500kW of storage, and according to Toronto Hydro, requires a small pad mount—one that’s slightly larger than the utility’s normal transformer.

“An opportunity like this comes once every forty years. Toronto Hydro’s distribution grid is facing a number of challenges and community energy storage can address some of these challenges instead of developing one solution per problem,” said Ivano Labricciosa, vice president of asset management at Toronto Hydro.

The project is funded by the project consortium and Sustainable Development Technology Canada (SDTC).

“As the city continues to grow, the electrical grid must also move forward in its technology. It is expected the CES project will offer many benefits in the short term to the grid, and even more in the long term,” said the consortium.

It likened the CES as having thousands of cell phone or car batteries in a system, capable of storing electricity and providing power when needed to one or more customers. The North York CES system is comprised of 48 eCamion battery modules, with three battery cells placed in each module.

“CES differs from other energy storage systems installed at a transmission or distribution station. Those at a station level provide system support to the station, whereas CES systems are installed at the customer level, offering more direct benefit in reliable electrical supply,” it continued.

“A lot has been written about energy storage but a lot hasn’t been demonstrated, so we’re very excited. It’s one thing to write it in a text book, but it’s another thing to actually get into a live environment and provide benefits for a modern smart grid application,” said Carmine Pizzurro, founder of eCamion.

Each consortium partner played a different role in the project. As project lead, eCamion designed and integrated the storage system to include thermal management communications and control; Toronto Hydro provided the local distribution system, connection and opportunity to “modernize an aging grid”; the University of Toronto managed the CPPM (control, protection and power management) technology and built algorithms to integrate the ‘brains’ of the system; and Dow Kokam developed the Advanced Energy Lithium-Polymer NMC (nickel manganese cobalt) cells and cell chemistry.

“This project is at the forefront of research and development in the field. This is one of the most recent R&D topics in electrical energy delivery systems,” added Dr. Reza Iravani from the University of Toronto.