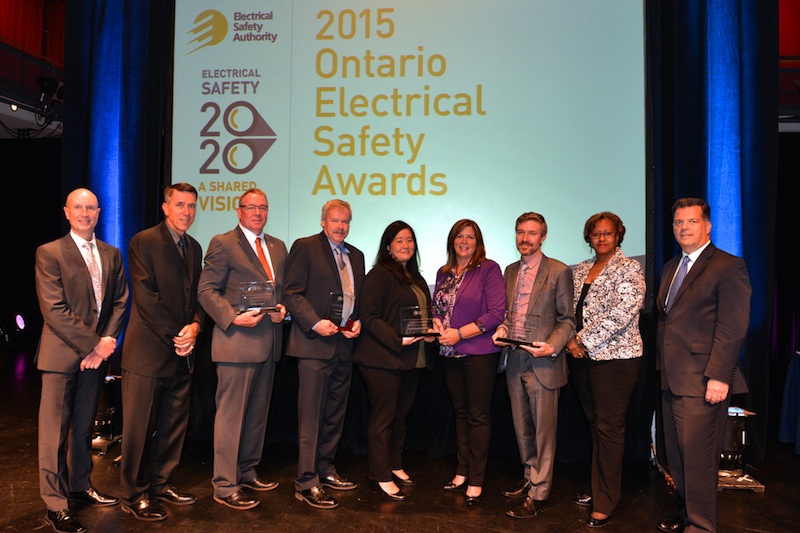 September 25, 2015 – Whether in the home or out in the community, electrical safety is top of mind, says Electrical Safety Authority (ESA) as it recognized three organizations for their “commitment keeping communities safe from electrical fatalities, serious injuries, damage or loss”.

Powerline Safety went to Hydro One Inc. for their “Electricity Discovery Centre”, a 1000-sf traveling mobile centre designed to engage and educate consumers about electrical safety, including powerline safety as well as energy saving tips.

London Hydro took home the award for Worker Safety for their development of three smart phone applications that provide access to safety information and reporting tools at their employees’ fingertips.

The Chief Public Safety Officer’s Special Recognition Award went to the TO2015 Pan/Parapan American Games Organizing Committee for their commitment to ensuring that athletes, workers, volunteers and spectators alike were able to participate in the Games free from electrical harm.

“ESA’s goal is to eliminate electrical fatalities and injuries in Ontario and ensure the highest level of public electrical safety,” said Scott Saint with ESA. “The effort of this year’s winners to protect and educate both workers and members of the public on important safety messages ensures we are that much closer to realizing an Ontario that is a safer place in which to live, work and play.”

The awards were established six years ago to formally recognize the important contributions of individuals and organizations toward achieving the vision of an Ontario where people can live, work and play safe from electrical harm, ESA said.