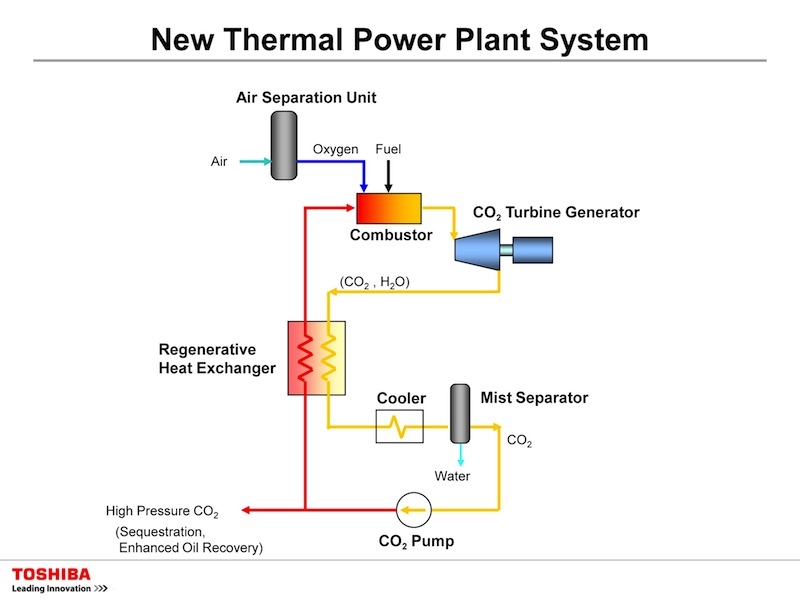 The companies are developing a system that produces a supercritical pressured carbon dioxide (CO2) stream to drive a turbine generator. The system eliminates the emission of nitrogen oxides (NOx) by burning a mixture of natural gas with oxygen instead of nitrogen-rich air, and separates and collects pressurized CO2 without adding on a carbon capture system. Such CO2 can be subsequently used for enhanced oil recovery (EOR) or for underground sequestration.

Toshiba will develop the system’s high-temperature and high-pressure turbine and combustor by making best use of its material, combustion and cooling technology. NET Power and Shaw will work on overall plant engineering and Exelon will support development and operations of the 25MW plant, such as selecting the site, obtaining permits and commissioning the facility.

Going forward, Toshiba will promote sales of the system globally, with a particular focus on the United States and the Middle East, where the companies expect to see strong demand for EOR, and for technologies that contribute to the improvement and optimization of power generation efficiency—and to the mitigation of climate change by supplying environmentally friendly power generation system.

The new plant burns a mixture of natural gas and oxygen combined with CO2 to produce a working fluid comprised mainly of CO2 and H2O that is used to drive the turbine generator. The working fluid is then cooled through a heat exchanger, and H2O is separated from it to create a CO2 stream. The CO2 stream is pressurized and a major part of this flow is fed back to the combustor to begin the cycle anew. The remaining part of the CO2 flow can be collected and sent into a pipeline.