The importance of upgrading your education—and equipment—to delight clients 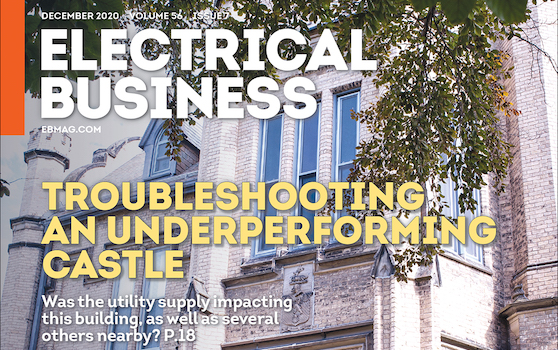 In the 1990s, the lighting retrofit in this old castle did not meet its monthly savings goal. What went wrong? The Castle © Sam Welbourn Photography. Used with permission.

December 7, 2020 – Back in the early 1980s, I was asked to determine the fault on a magnetorque system on a mobile crane that was built, likely, in the 1950s, and used some unique generating and control systems.

This surpassed my traditional journeyman training, and I realized I needed to upgrade my education.

Durham College was running a program called “Electrical Machine and Control Methods Technician”. Primarily catering to local, large-industry electricians, the program covered your base electrical education, but also included microprocessing, digital technology, PLCs (programmable logic controllers) and Boolean algebra. All new technology (or new to me) at the time!

The classes were held twice a week in the evenings, and lasted five years. The program started with 160 students and, by the time we made it to the 5th year, that number had dropped to just four.

Sadly, the college didn’t have enough students to run the final year of classes, but it was enough to get me hooked on learning more, and being able to apply my new knowledge in the field. So I also picked up a few code courses and a new fiber optic course. (It was a great education, and serves as an excellent example of how the presence of large industry—in my case, General Motors—can benefit a community and its academic institutions).

These experiences galvanized the importance of continually upgrading my knowledge in the trade.

Applying learning and modern tools to the jobsite

Our company was asked to maintain hospitals in the area. I felt uncomfortable with possible load increases without first having any monitoring equipment to ensure proper operation, so I bought our first electrical analyzer. Although it was bulky, and the display was a little paper roll (like a calculator) that printed any breach of programmed limits, we used it a lot. 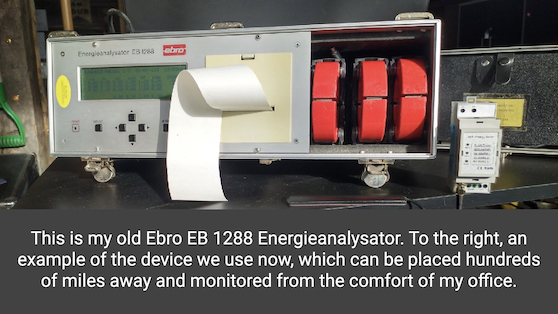 This is my old Ebro EB 1288 Energieanalysator. To the right, an example of the device we use now, which can be placed hundreds of miles away and monitored from the comfort of my office. (Author photo.)

One of the hospitals had an issue with their X-ray device, and they requested the manufacturer send a technician to resolve the problem. The manufacturer, however, would not send anyone until it could be shown that the X-ray issue was not generated by the hospital’s own electrical system.

This kind of response from manufacturers was becoming all-too common. However, our electrical analyzer swung the issue in our client’s favour; it showed the hospital’s electrical system was operating within acceptable limits. The hospital submitted our report to the X-ray manufacturer, who then dutifully sent a technician to clear the problem with the machine.

In the 1990s, we were asked to retrofit the lighting in an old castle. Despite anticipating a certain amount of monthly savings after the retrofit, we ended up not meeting our goal. More on that below.

Around that time, we also got called in by a local school board. Some motors were failing in one of their newest schools, and no one knew why. I left a few of our analyzers onsite at the school for a week (we usually do 7 days-worth of monitoring). We discovered that when the load dropped in the evening—when the school was empty—the utility voltage increased to damaging levels.

I provided this information to the LDC, and they pointed the finger at several of the school board’s transformers, which would cost $40,000 to replace.

I didn’t agree with the LDC’s conclusion; three transformers failing at the same time is unlikely. My client then suggested we monitor another of their schools, which was less than a block away from the first.

Sure enough, the higher voltage was also present there.

After some digging, we learned the LDC had recently replaced a transformer station, which pumped up the voltage for the first consumers along the line.

And wouldn’t you know it? Our castle project was on the same line!

By following the bread crumbs, our project took us from an underperforming lighting retrofit and failing customer-owned motors to the utility’s new transformer station where, sure enough, the voltage had been increased.

When I first started in the industry, the common voltages were 110V and 550V. Today you see 127V to over 600V. The utilities do this for a myriad of reasons, but they also boost their income when they increase voltage.

When you increase Voltage, you increase Amperage and, by extension, wattage. And customers are charged by kilowatt-hour (kWh).

And now your client’s equipment is also running faster and hotter… which leads to harmonics (more on that below).

You’re probably wondering how this voltage issue got resolved with the LDC. To that, all I can say is this: it’s funny how, when you’re dealing with a utility issue—and the facts are on your side—those issues tend to magically disappear.

We were also called out to a recording studio where, every morning at about 8 am, noise was being generated on the discs they were producing.

So, I set an analyzer on the system and came back a week later to check the results. Sure enough, we saw activity on the waveform (we can drill down to a millionth of a second). I decided to go for a walk to see what was going on in the neighbourhood. Just down the street from the studio, on the same transformer line, was a welding shop that fired up all of its equipment at—you guessed it—8 am.

The result here was a complete upgrade to the utility’s transformers (and it wouldn’t be the first time for this LDC). As you can imagine, I was not a popular guy with the LDC during that time!

Our equipment also monitors harmonics, which can be generated by a number of things but, generally, are created by discharging capacitors, which create vibrations on the system. A vibration, in an existing magnetic field, generates more electricity.

(I still have all of my grandfather’s educational materials dating back to 1899 and, even 120 years ago, they knew about harmonics. Back then, they would analyze harmonics with a small wooden box and a series of tone forks. You would insert a certain fork and move the box around the electrical device [motor] to determine which frequency was present. Your applied voltage is high already, and harmonics can increase it beyond acceptable levels.)

A factory we analyzed had equipment dating back to the 1930s. The distribution was made from much heavier steel, the motors employed cast steel (some 1-in. thick or better) for the housing, and the windings were of a much larger gauge wire and thicker shellac. Although these motors consumed more electricity to operate, those heavy walls absorbed many of the electrical disturbances we see today.

Harmonics are tricky. You can try installing harmonic filters and/or purchasing electrical distribution that is designed for harmonic vibration. Increasing the size of the distribution is also a pretty common remedy.

Transients were a big problem in the 1980s and 1990s. Digital circuits use I/O (On/Off) using a square waveform as instructions for a computerized device. A transient is created when an inductive circuit switches to an Off condition. Electromotive force (EMF) requires counter-EMF (CEMF) to maintain the circuit.

The CEMF acts completely opposite to the EMF, so when the EMF switches to an Off condition, the CEMF spikes. The transient on a simple 4-lamp fluorescent light fixture can be 1500 volts! It can mimic an On condition to a computerized device, causing the system to freeze up and stop operating. (Computers have much better suppression now, but transients can occur.)

The power bar you use for your computer and devices is a typical example of a transient filter and, of course, you can get filters for many different applications. In my day, they used Zener diodes to cap the voltage and prevent it from exceeding a specific level.

For all these reasons, we have a number of analyzers that we take into the field regularly, and they are far more compact than our original unit (which still sits in my office). We also have thermographic cameras on-hand for additional testing.

Ultimately, all of this speaks to the importance of continuing education and training—as well as investments in good equipment—for the electrical contractor. For us, it has solidified our position as not just a group of wire-pullers, but as true partners and problem-solvers for our customers.

John T.G. Vickery is the CEO of family-owned Vickery Electric, which was established four generations ago in 1923 by John W.T. Vickery. Under John’s leadership, Vickery Electric has taken an “aggressive approach to education”, and has expanded its technical abilities to include Marine Specialization, Network Installation, Fire Alarm Installation and Verification, Electrical Diagnostic Study, and Lightning Suppression Systems.

This article—along with other great content—appears in the December 2020 edition of Electrical Business Magazine.