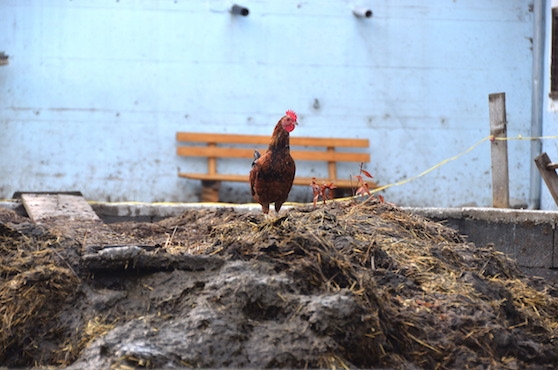 “Chicken on the manure” by Herzi Pinki.

March 9, 2018 – Farm manure could be a viable source of renewable energy, and University of Waterloo researchers are developing technology to produce renewable natural gas from manure so it can be added to the existing energy supply system.

Their approach would involve eliminating “particularly harmful gases released by naturally decomposing manure when it is spread on farm fields as fertilizer” and partially replace fossil natural gas.

“There are multiple ways we can benefit from this single approach,” said David Simakov, a professor of chemical engineering at U of W, adding the technology could be viable with several kinds of manure, particularly cow and pig, as well as at landfill sites.

To test the concept, researchers built a computer model of an actual 2000-head dairy farm in Ontario that collects manure and converts it into biogas in anaerobic digesters. Some of that biogas is already used to produce electricity by burning it in generators, reducing the environmental impact of manure while also yielding about 30% to 40% of its energy potential.

Researchers want to take those benefits a step further by upgrading, or converting, biogas from manure into renewable natural gas. That would involve mixing it with hydrogen, then running it through a catalytic converter. A chemical reaction in the converter would produce methane from carbon dioxide in the biogas.

Known as methanation, the process would require electricity to produce hydrogen, but that power could be generated onsite by wind or solar, or taken from the grid at times of low demand. The net result would be renewable natural gas that yields almost all of manure’s energy potential and also efficiently stores electricity.

“This is how we can make the transition from fossil-based energy to renewable energy using existing infrastructure, which is a tremendous advantage,” said Simakov.

The modelling study shows that a $5-million investment in a methanation system at the Ontario farm would, with government price subsidies for renewable natural gas, have about a 5-year payback period.

A paper on modelling of a renewable natural gas generation facility at the Ontario farm, which also involved a post-doctoral researcher and several Waterloo students, was recently published in the International Journal of Energy Research.

PHOTO: “Chicken on the manure” by Herzi Pinki.