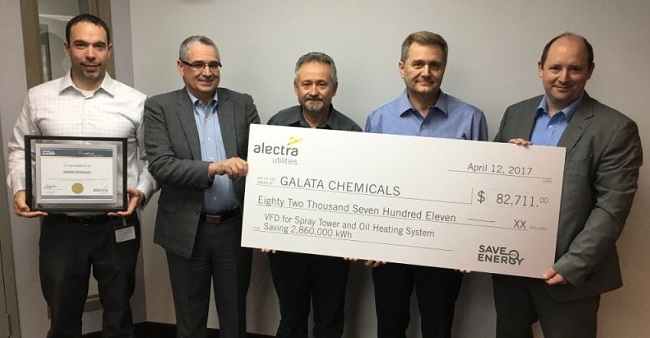 April 20, 2017 – The Bradford, Ont.-based Galata Chemicals plant was recognized recently by Alectra Utilities for reducing its electricity consumption by 28% through the utility’s Save on Energy Retrofit program.

Galata Chemicals (formerly Solucor), an international producer and marketer of additives for the Polyvinyl Chloride (PVC) and associated industries, was presented with a cheque for $82,711 as a result.

The company has participated in several retrofit projects over the years, including one involving lighting, but most recently says it completed the conversion of “key pieces of equipment” to Variable Frequency Drives (VFDs). “The sheer size of the motors being controlled, some of which are 400 hp” makes this endeavour stand out, the utility noted.

The conversion to VFDs will reduce the company’s electricity consumption by 2,859,942 kW-hours per year, the equivalent of removing 325 homes off the grid, according to Alectra. It will result in electricity savings for Galata Chemicals of over $400,000 per year, it adds.

VFDs are capable of varying the output speed of a motor without the need for mechanical pulleys, the utility explains, which reduces the number of mechanical components and overall maintenance.

“Galata Chemicals has demonstrated a proactive approach to managing their energy costs and it is their strength and leadership that serves as an example to others to pursue similar objectives,” said Mark Henderson, senior vice-president, Energy Solutions & Services for Alectra.