Features
Eliot hones in on built-in autonomous over automated devices 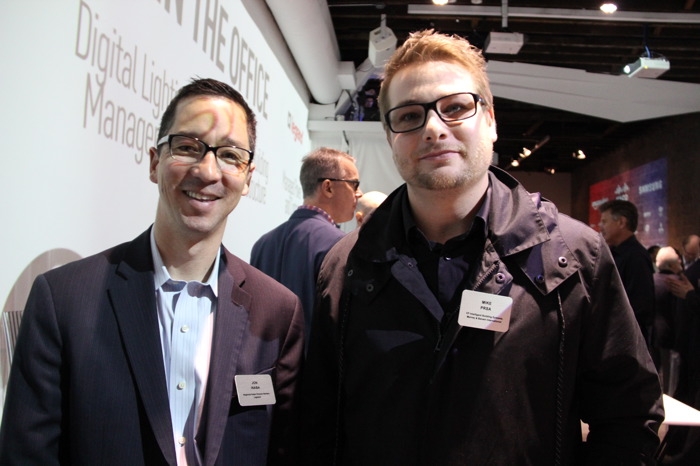 November 22, 2016 – “I’m sure the electrical contractors have been following the Internet of Things and wondering when and how that will affect them,” said John Selldorff, CEO of Legrand North America at the company’s launch of its latest global IoT solution for the built environment: Eliot.

“Eliot for us is a way to identify those products that fit in that world of connected devices, of things that communicate with the internet, that might be talking to the cloud, and separate that from traditional products that they [contractors] buy and install everyday,” Selldorff told EBMag in an exclusive interview just after the launch in New York, N.Y. “What we’re trying to do is have a common framework and structure, make sure everyone understands that if you’re dealing with Eliot, you’ll have the same way to communicate, to ensure secure installations and reliable ones so they can get in and off the job quickly and successfully.”

“We are built in, not plugged in,” Selldorff reminded the audience of roughly 100 gathered for the launch. “The way we learn or work together is changing because of the opportunity to incorporate video, audio and light in dynamic ways. We’re already there. We’re providing the infrastructure for systems that at their core support easier, faster control and maintenance with remote diagnostics.”

Eliot is all about moving from automated to autonomous devices, Selldorff added—devices that self-connect, self-configure and learn and adapt without human interaction. “Imagine if your phone automatically connects with your calendar and GPS to tell you you’ll be late for your morning meeting because of traffic,” he said.

Brian Dibella, president of electrical wiring systems with Legrand, told us the intuitiveness of Eliot will be a big bonus to electrical contractors.

“They’re on the job. They’re getting paid to get it done. It’s not a homeowner who can take the time to figure it out and have fun with it,” Dibella said. “This is a pro with deadlines and schedules and I think that raises the bar for what’s got to be intuitive, not just when in use, but when being installed because no one wants call-backs. Then it becomes a question of how do we enable remote diagnostics so the contractor doesn’t have to send a truck if something goes wrong. That’s where the choice of partners matters.”

Legrand notes it couldn’t do this alone and Eliot is the result of numerous partnerships, including Lumenetix, Cisco Digital Ceiling, Amazon and Samsung. As such, Legrand will be launching an Amazon Alexa smart home skill for its Radio Frequency (RF) lighting control system and integrating connected lighting control systems with the Samsung Artik cloud.

Here are some more specific examples of how Eliot is currently underway at the company:

• Legrand’s Pinnacle brand is deploying lighting technology that will target melanopic wavelength and “follow” the individual as they go through their 24-hour cycle and rely on actual biometric feedback. Each environment they enter throughout the day will be dynamically shifted to match the biological solution required.

• Legrand is testing Network Presence Sensing (NPS) technology with its switches for monitoring RF signal strength between switches, lights and other IoT devices. It also detects the interference created when people or animals are present in the wireless network.

Mike Prsa is a partner and VP with Toronto-based Mulvey & Banani, an electrical consulting firm, and was at the Eliot launch on November 10, 2016.

“I though the launch was very beneficial. It’s nice to see that what we’ve been working towards and preaching for almost a decade is finally coming to fruition in the marketplace,” Prsa said. “The big players are finally coming together and integrating.”

He said he was also impressed to see the gap between residential and commercial IoT applications bridged by Eliot.

“One of the things I do like about Canada is the willingness to embrace things earlier… particularly things that will make the spaces where they live and work more comfortable,” Selldorff said. “I expect Canada to be a leader in adopting technologies that are enabled by the Internet of Things.”

As of November 2016, there are over 22 million Legrand connection points already in existence, according to the company, and annual sales of connected devices are over $350 million in 2015, up 34% since 2014. Legrand says it is now targeting double-digit average annual sales growth for connected products by 2020 and doubling the number of connected product families from 20 in 2014 to 40 in 2020.

Don’t forget to check out our PHOTOS from the event!