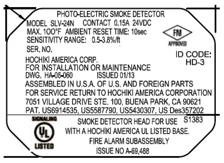 August 11, 2014 – UL has issued a warning regarding the Hochiki SLV-24N smoke detector, which bears a counterfeit UL Mark for the United States.

The SLV-24N has not been evaluated by UL to the appropriate standards for safety, so it is unknown whether it complies with any safety requirements. The counterfeit detector is, however, similar to a smoke detector that is authorized to bear the UL Mark except as noted:

The word foreign is misspelled on the counterfeit unit.